More than $100K of rims and tires were stolen from a Louisiana car dealership. Police say similar heists have taken place in other states 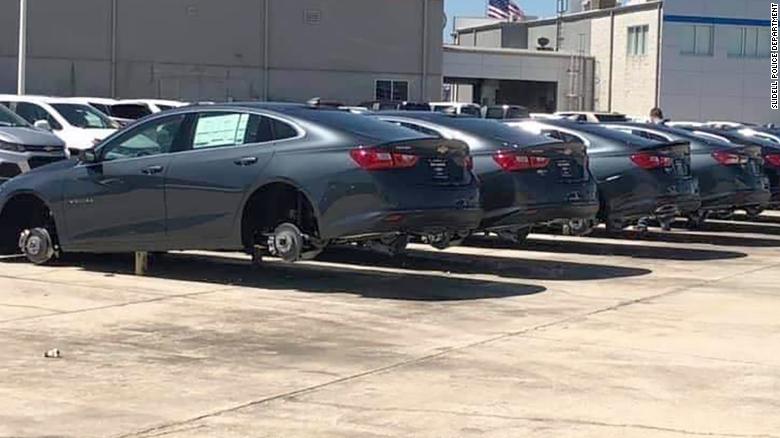 Suspect bypassed alarms and tampered with lights, pulling off the heist in the dark

As the manager of a car dealership in Louisiana was opening up the store this weekend, they discovered dozens of vehicles sitting on wooden blocks missing their tires and rims.

In total, 124 tires and rims were stolen on Saturday from the Matt Bowers Chevrolet dealership in Slidell, Louisiana, northeast of New Orleans. The theft, caught on camera, showed two men sneaking on to the property in the early morning hours.

"They defeated locks, alarms, surveillance video, and went as far as to manipulate the exterior lights in the parking lot so they could work in the dark of the night, completely undetected," police said.

The thieves removed tires and rims from a wide range of Chevrolet vehicles, including the Tahoe, Malibu, trucks and smaller SUVs. They loaded the stolen goods onto a U-Haul truck and drove away, leaving the tireless vehicles on wooden blocks.

Slidell police suspect it was a job by a professional ring and said the thieves took approximately $120,000 worth of merchandise.

This isn't the first time a car dealership has been hit by tire thieves and Slidell police are investigating if other cases out of state are related.

"Similar incidents have occurred across the country, specifically in Texas and Oklahoma, and it was the exact M.O. (modus operandi)," said Fandal.

In February, Cutshaw Chevrolet in Grapeland, Texas, lost tires and rims from about 16 vehicles, all Chevrolet. The thieves left the vehicles on landscape timbers and also fled in a U-Haul truck.

"They are very selective on tires," said Michael Cutshaw, general manager of the dealership. "They go for the 20s and 22s that are on cast aluminum wheels."

Cutshaw said that wasn't the only time tire thieves have hit his dealership.

"The hardest part is tracking these tires and you really can't," he said. "Just because police find the tires, it's hard to track them back to the dealership."

It is unclear if the Cutshaw case is related to the ones Fandal mentioned.

As police continue to investigate, Matt Bowers, the owner of the dealership in Louisiana, has offered a $25,000 reward for information leading to the arrest of the suspects.

"I like to follow up and say that we won't put up with it here," said Fandal. "This won't be the first time we travel out of state to come find you. You are probably the same ones who did it in Texas and Oklahoma but now you've done it here."