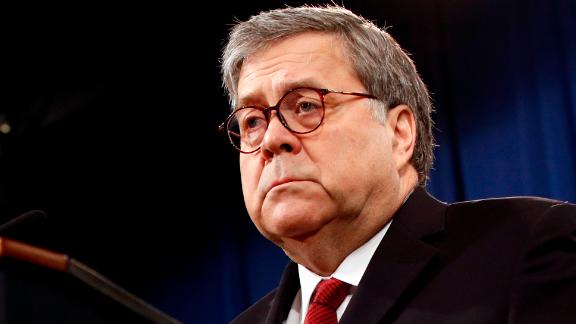 Love bridges? Then get yourself to Gatlinburg, Tennessee, where the longest pedestrian suspension bridge in the US will soon be open. Here's what else you need to know to Get Up to Speed and Out the Door. (You can also get "5 Things You Need to Know Today" delivered to your inbox daily. Sign up here.)

Everybody knew that Attorney General William Barr's appearance this morning before the Senate Judiciary Committee was going to be heated. Now it promises to be red hot. That's because of the revelation of a letter written by special counsel Robert Mueller in which he expressed concern that Barr's four-page summary of the Russia investigation report mischaracterized some of Mueller's findings. Mueller told Barr in a phone call that although he didn't think the attorney general's summary was inaccurate, he felt the report was much more nuanced on the obstruction of justice issue than the summary indicated. So cue the tough questions from the Democrats on the committee, who will hammer Barr over this.

The battle for control of Venezuela rages on. Opposition leader Juan Guaido called for protesters to return to the streets, a day after he stood with a group of soldiers and announced an uprising to seize power from embattled President Nicolas Maduro. But Maduro says the "coup" attempt by Guaido -- who is the head of Venezuela's National Assembly -- was put down by the military. In a televised speech, Maduro rejected claims he's lost control of the military, and he accused "imperialist" forces of trying to take over the country. The Trump administration reiterated its support for Guaido, and Secretary of State Mike Pompeo said that Maduro was planning to leave Venezuela for Cuba, but was talked out of it by the Russians. Maduro denied that. Click here to get the latest updates on the unrest.

The man accused of killing two people during a shooting at the University of North Carolina at Charlotte has been charged with murder. Trystan Andrew Terrell faces two counts of murder and four counts of attempted murder in the shooting, in which police say he opened fire on students on the final day of classes. As police led Terrell away in handcuffs, he tilted his head back and smiled at the cameras. This is just the latest in a string of shootings and threats that North Carolina campuses have had to deal with over the past few years.

The Department of Homeland Security will start testing the DNA of migrants apprehended on the US-Mexico border, two officials told CNN. The pilot program, which starts next week at two border locations, seeks to ID and prosecute individuals posing as families as part of the department's effort to crackdown on human smuggling. The program involves the use of a cheek swab, and results are usually available in about 90 minutes. Homeland Security has long maintained that children are being exploited by traffickers to skirt the nation's immigration laws.

Former Minneapolis Police Officer Mohamed Noor was convicted of third-degree murder and manslaughter in the 2017 shooting death of Justine Ruszczyk. Noor killed Ruszczyk, an Australian, after she had called 911 to report a possible sexual assault in the alley behind her home. Noor said he fired at Ruszczyk because he feared for his partner's life when she approached their squad car. But prosecutors said Noor overreacted, killing Ruszczyk just a month before her wedding. It's believed that Noor is the first police officer to be convicted of murder in Minnesota in recent memory.

So the "Sonic the Hedgehog" trailer is out, and everybody's freaking out about it because of ... his teeth?

It was hard to tell in all that darkness, but yeah, that was country star Chris Stapleton moonlighting as a White Walker in the latest episode of "Game of Thrones."

If you want one of those plant-based Impossible Burgers, good luck trying to find one. America is running out of them.

Meet the 25-year-old dirt bike champion in Dubai who is inspiring girls all over the UAE to take up the sport.

He broke his foot in the middle of the London Marathon. But this firefighter kept running on it -- for 18 miles! -- to finish the race.

The police officer showed up to respond to a complaint about noise. He ended up getting in a few licks on the drum set himself.

Taking it to the streets

Thousands of teachers in South Carolina will protest today for better pay, but also for more mental health counselors for students and protection against retaliation for speaking out.

This is not about Hollywood. It's not about movies. This is about ultimately protecting the only planet we know right now to host life.

NASA Administrator Jim Bridenstine, telling the Planetary Defense Conference that meteors really are a threat to the Earth

The arrival of spring is always a bit delayed in Alaska, but -- despite the snowflakes -- this guy is getting a jump on cutting the grass anyway. (Click to view)