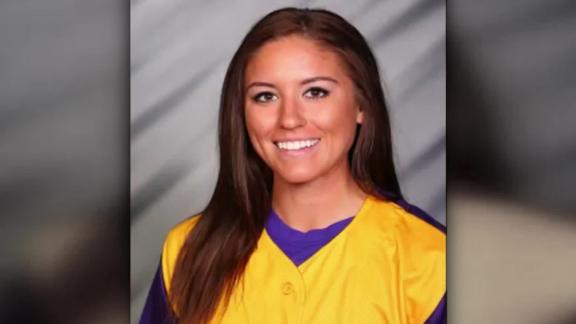 A manhunt is underway in Iowa after a 25-year-old Iowa woman was fatally shot while driving home from work.

A 25-year-old Iowa woman was driving home from work when a bullet tore through the driver's window of her vehicle and killed her, Waterloo police said.

Micalla Rettinger was in the car with two passengers around 2:30 a.m. Sunday when she was hit in the neck, police said. A second passenger, Adam Kimball, 32, was injured and is being treated at the University of Iowa Hospitals in Iowa City. The third passenger was uninjured, according to police.

"There is nothing to indicate the victims in this case were in any way involved in any activity that would have caused them to be targeted in this manner," police said in a statement.

Rettinger graduated from the University of Northern Iowa in 2016 with a degree in biology. She was a member of the school's softball team.

"We are devastated to learn of the senseless death of Micalla Rettinger," David Harris, the university's director of athletics, said in statement. "This news is heartbreaking to our softball team, UNI Athletics and the entire campus. Our thoughts and prayers are with Micalla's family and friends."

After graduating from Park Hill High School in Kansas City, Missouri, Rettinger went on to become an "outstanding outfielder for the Panthers," according to a university news release. In her junior and senior years, she earned second-team Missouri Valley All-Conference honors, the school said.

"I am devastated. KK was a pretty special kid to us," head softball coach Ryan Jacobs said in the statement. "I can still see the smile on her face and I remember the way she always thought of other people first in a genuine way. When we had youth camps, she was the one that all of the kids on campus would be drawn to.

"This is a huge loss to our team and everyone that knew her."

Waterloo authorities are asking for the public's help in identifying anyone who may have been involved in "shooting or hunting (legal or illegal) in the area of the Cedar River between the Highway 218 Bridge and the Conger Ave. Bridge."

Waterloo police said there is a $6,000 reward for any information leading to the arrest of the person who shot her.

"We are also asking anyone who may have seen any suspicious activity in this area or has a trail/surveillance camera in this area to contact the Waterloo Police Department Investigations Division at 319-291-4340, Option 7," the department said.