An Army vet, a border agent, an uncle and a faithful friend became heroes during the deadly California synagogue shooting 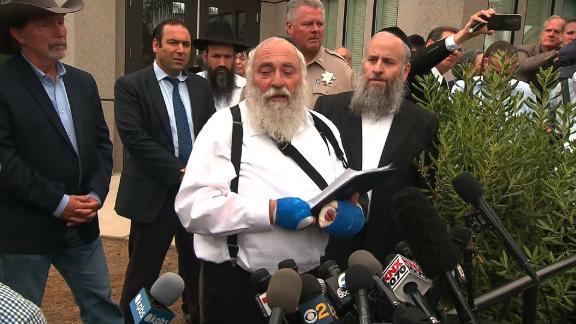 Rabbi Yisroel Goldstein, who was injured in the Poway, California, synagogue shooting, emotionally remembers Lori Kaye, who was killed.

One woman shielded a rabbi from gunfire, and gave up her life protecting him.

Another worshiper was shot in the leg, but still managed to run with children until they were safe in a nearby home.

And an Army veteran deep in prayer jumped into action once he heard gunfire, chasing the gunman until he left the synagogue.

These selfless acts may have prevented far more carnage during Saturday's attack at Congregation Chabad, north of San Diego. Here are their tales of heroism:

The woman who took a bullet for the rabbi

Lori Gilbert Kaye will always be known for her extraordinary bravery -- protecting her friend and rabbi, Yisroel Goldstein, by jumping in between him and a gunman wielding an AR-style assault weapon.

She lost her life doing so. But Kaye's final act of sacrifice was just the latest example of countless good deeds throughout her 60-year life.

"She is the symbol of random acts of kindness," Kaye's friend Roneet Lev said.

Lev, a doctor, frequently travels overseas. She said Kaye would often give her one or two checks before each trip -- "each for $100 or more."

"She said, 'Roneet, go find some charity that needs it,'" Lev said.

And when Kaye recently treated Lev's mother to breakfast at a bagel shop, Kaye purchased an extra bagel in case a local homeless person needed it.

"She's making us stronger as a Jewish people. We will not let anti-Semitism stop us in any way. We know there is evil in this world, but it is nothing compared to the good we have."

The wounded uncle who rushed children to safety

Almog Peretz's sister was fed up with the constant threat of violence in Sderot, an Israeli town on the Gaza border.

The family's home was hit twice by rockets. Too often, family members had to run to a bomb shelter.

So Peretz's sister fled to the United States -- only to have a gunman attack her brother and daughter at her synagogue.

Peretz, who was visiting from Sderot, and his 8-year-old niece were both injured, but are expected to recover.

If not for the uncle's quick actions, more children could have been seriously wounded.

The 34-year-old said the gunman started firing from afar.

"He was shooting at me from across the room. I saw him staring at me," Peretz said.

That's when Peretz believes he was shot in the leg. Still, he ran to an emergency exit door and told all the children nearby to follow him.

He said he and the children ran out the door, down the stairs, and to the rabbi's home next door.

Back home in Sderot, Peretz's father couldn't be more proud of his son.

"My son is a hero -- truly a hero," Aharon Peretz said. "It's good that he saved young children when someone came to kill them. He cared for them and saved them and put them in a place where they can be safe."

But he's stunned that the country that was supposed to be a haven could bring such violence.

"They left because of the Qassam rockets, and suddenly terror comes to them also in San Diego, which is unbelievable," the father said. "I didn't believe something like this could happen."

The Army veteran who said he ran toward the killer

Oscar Stewart was in the middle of prayer when gunshots rang out.

Instinctively, he ran toward the gunfire.

As other congregants ran, "I ran to the lobby where the guy was with the gun, and I saw him discharge two more rounds," Stewart said.

"As he was discharging the rounds, I ran up to him and I yelled at him, and he dropped his weapon and he ran out. And I chased him out of the sanctuary."

Stewart said his military training gave him the instinct to go after the gunman.

"They say I'm a hero, I don't think I'm a hero," Stewart told KGTV. "I just did what I did and I chased him out onto the street."

The off-duty border patrol agent who stopped the gunman

Stewart said after he chased the gunman to an exit, an off-duty border patrol agent -- who recently started worshiping at the synagogue -- took over from there.

Rabbi Goldstein said the off-duty agent -- Jonathan Morales -- had recently discovered his Jewish roots and had traveled 3 ½ hours from El Centro, California, to pray with the congregation on Passover.

The rabbi said he previously told Morales to arm himself when he comes to their congregation. He recalled telling Morales, "we never know when we will need it."