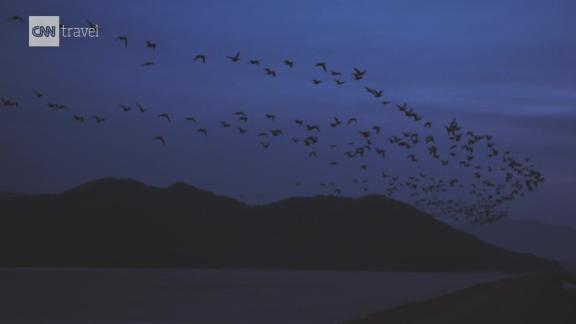 For over six decades, the Korean Demilitarized Zone has been closed off from human interference. As a result, wildlife is thriving. Here's a look inside.

Is there a better way to detect early stages of Alzheimer's than medical tests? Maybe this video game is the answer. Here's what else you need to know to Get Up to Speed and Out the Door. (You can also get "5 Things You Need to Know Today" delivered to your inbox daily. Sign up here.)

The shooting over the weekend at a synagogue near San Diego is just the latest attack against houses of worship that have occurred over the past six weeks. On Saturday at Chabad of Poway a gunman shot people who had gathered to celebrate the end of Passover. One woman was killed after she stepped between the shooter and the synagogue's rabbi. Three others were injured. The shooting was barely over when the rabbi stood on a chair and told his congregation that, "Terrorism like this will not take us down."  The suspect in the shooting, a 19-year-old college student, was later arrested and charged with first-degree murder.

Seven people were found dead in two different homes this weekend in Sumner County, which is about an hour northeast of Nashville. Investigators are calling the slayings "related homicides." The bodies of four people were found in one home on Saturday, with a fifth body found at a nearby home. Then on Sunday police said the bodies of two more victims had been found in the first home. Police haven't said how the victims were killed or whether they were related to each other. A suspect was arrested after he was shot by police. There's no word yet on a motive or the suspect's relationship with the victims.

Hong Kong just saw its biggest march in five years. Tens of thousands of residents were in the streets to protest a proposed law that would make it easier to have people extradited to mainland China. Government officials say the proposed law just closes a loophole that has stopped officials from bringing criminals to justice. But opponents to the bill say it could result in more activists, foreign business owners and journalists being forced to surrender to authorities in mainland China. Hong Kong has a separate legal and political system from the rest of China that allows its residents to enjoy freedoms not available in the rest of the country.

The Socialist Workers' Party won this weekend's general election in Spain, but the center-left party fell short of an overall majority. So the socialists will have to get help from rival parties to form a government. One of the parties the socialists might make a deal with include the Catalan separatists who pushed the unsuccessful independence movement in 2017. Meanwhile, a far-right party named Vox will enter parliament for the first time since the end of dictator General Franco's rule in 1975.

Love to hike? Then you may want to head to one of the most unlikely places in the world to take a leisurely walk -- the DMZ. The Korean Peninsula's Demilitarized Zone is the world's most heavily armed border. But it's teeming with wildlife and the first phase of a planned "Peace Trail" project in South Korea has been approved. It will open up three hiking routes along the heavily fortified border. The area around the DMZ, a 160-mile no-man's land established in 1953, has become an unexpected haven for wildlife, especially endangered species.

The Sexiest Man Alive (that's actor Idris Elba to us mere mortals) tied the knot over the weekend, and women the world over wept.

We can't tell which is more cool: That a bunch of high school kids put on an "Alien" play or that Sigourney Weaver paid them a visit.

The Battle of Winterfell is over. Did you survive it? Our AJ Willingham did and she has some thoughts on "Game of Thrones'" very dark night.

About $30,000 fell out the back of a truck on a Michigan highway. Police are asking folks to return the cash. Good luck with that one, officers.

"The Lord watched over us."

One of the five men rescued from a cave in southwest Virginia.

The Earth-shattering and record-setting box office haul for "Avengers: Endgame" during its opening weekend

Watch this dad prank his daughter in the sweetest way possible. (Click to view)