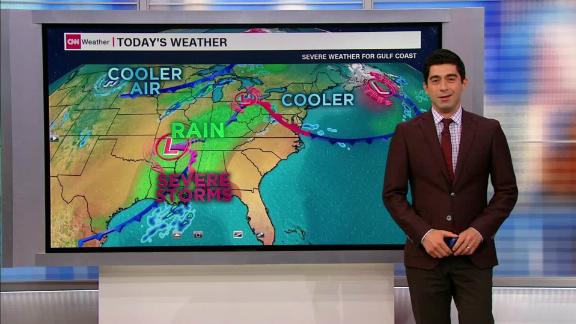 Severe storms are possible Thursday, stretching from New Orleans to Panama City, Florida. CNN meteorologist Pedram Javaheri has today's forecast and what to expect in these coastal communities.

Strong storms killed at least five people in Texas and Louisiana and left severe damage across parts of both states Wednesday and Thursday -- including at Louisiana Tech University and in its host city of Ruston, where the mayor says a tornado struck overnight.

Two people were killed in Ruston as a tornado ripped through the college town around 2 a.m. CT, tearing through buildings in the city and damaging athletic facilities on the Louisiana Tech campus, Mayor Ronny Walker said.

The identities of those who died weren't immediately released. No college students were hurt, the university said, but the school is closed Thursday as the city copes with power outages and debris.

City officials have set up a shelter for residents at an elementary school. Louisiana Gov. John Bel Edwards is traveling to Ruston on Thursday to assess the damage, Walker said.

"Our prayers are with the people of Ruston today," Edwards tweeted Thursday morning.

City streets and yards were littered with tree branches and other debris, video from CNN affiliate KTBS shows.

The storm ripped apart a scoreboard at Louisiana Tech's softball field and left a few trees overturned nearby, including one that had fallen across the stands behind home plate, photos from Cory Diaz at the Monroe News-Star show.

Several tornado reports were made Wednesday and Thursday in Texas and Louisiana.

The weather service said it would send tornado survey teams to the San Augustine and Ruston areas on Thursday.

Three were killed as a creek swept away a car

In Texas' Erath County, three people were killed during severe weather Wednesday when a car they were in was swept away in a creek, CNN affiliate KTAB/KRBC reported.

The car had contained a family of four. Maria Ramirez and her two children died -- Ramirez was found dead inside the vehicle, and the bodies of the children -- ages 3 and 7, were found downstream, the affiliate reported.

The children's father was rescued, having clung to a tree, the affiliate reported.

Tornado and severe thunderstorm watches were in effect for parts of Louisiana and Mississippi Thursday morning.

Storms may dissipate in the morning, but more are expected in the afternoon along the Gulf Coast.

An area of about 6.5 million people has a slight risk of severe thunderstorms Thursday, covering parts of Louisiana, Mississippi, Alabama and the Florida panhandle, the National Weather Service's Storm Prediction Center said.