For the first time, a rare rhino was born by artificial insemination at the Miami zoo 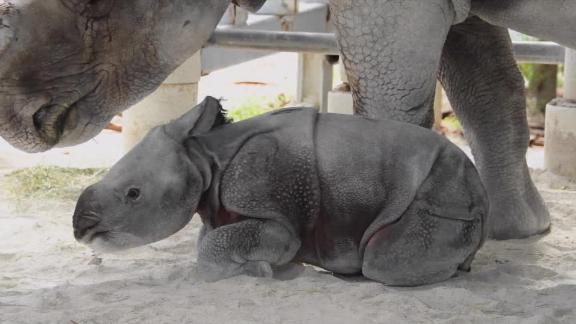 A newborn rhino at Zoo Miami has made history as the first successful birth of its species as a result of induced ovulation and artificial insemination.

Zoo Miami is celebrating the birth of its newest addition: a rare baby rhino.

The newborn is making history by being the first successful birth of the species as a result of induced ovulation and artificial insemination, according to the zoo.

The rhino, whose gender is unknown, was born on Tuesday at 12:30 a.m. and is the first baby for Akuti, a 7-year-old greater one-horned Indian rhinoceros. Both mother and baby, which doesn't have a name yet, seem to be doing well, but the zoo will know more once the veterinary team is able to do a full exam.

"This will be performed when the staff feels that it can safely separate the infant from its very protective mother for the few minutes that the exam will take," the zoo said. "It is critical that the mother and newborn are able to establish a bond, which can sometimes be a challenge for first-time mothers."

This is a big win for conservation, because this species is heavily poached for it's horn. There are around 3,500 Indian rhinos left in the world, according to the International Rhino Foundation. The gestation period of Indian rhinos is between 15 and 16 months and mothers only give birth to one calf every two to three years.

Both mother and 18-year-old father, Suru, were born at the San Diego Zoo Safari Park. Akuti, which means "Princess" in Hindi, arrived at the zoo in Miami in 2016. Suru, which means "A Start" in Bengali, joined in 2003. After several unsuccessful attempts at natural breeding, a special team of experts from the South East Zoo Alliance for Reproduction and Conservation, or SEZARC, along with Dr. Monica Stoops from the Cincinnati Zoo, started the process of artificially inseminating Akuti in January 2018.

"This very rare birth is not only significant for Zoo Miami, it is incredibly important to the international efforts to maintain a healthy population under human care of this highly vulnerable species throughout the world," said the zoo.

In a few weeks, once baby and Akuti are settled into their new life, they will be available for public viewing. For now everyone can adore the pictures the zoo shared of the new family on Facebook.

SEZARC works with several zoos and aquariums in the United States to help increase the populations of rare species through reproductive science. Last year, the organization was unsuccessful in artificially inseminating a white rhino at the Jacksonville Zoo.

Woman in critical condition after motorcycle crash in Fort Wayne