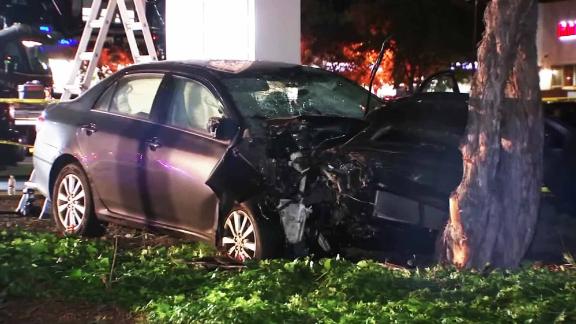 Police say a driver targeted a group of pedestrians on a sidewalk in Northern California because he thought they were Muslim.

The driver accused of intentionally hitting a group of pedestrians in Northern California attacked people he believed were Muslims, police said.

Peoples, 34, has been charged with eight counts of attempted murder for allegedly driving his vehicle into pedestrians in Sunnyvale earlier this week. If convicted, Peoples faces up to life in prison.

The suspect briefly appeared in court Friday, wearing a prison jumpsuit and peering back at the audience several times.

Chuck Smith, an attorney representing Peoples, did not enter a plea and asked the judge to postpone his client's arraignment. He said Peoples is a religious man who is praying for the people who were injured.

"Absolutely we are disputing that this was an intentional act and this is a case of mental disorder," he said.

Peoples is due back in court on May 16.

Hate crime charge could be forthcoming

Jay Boyarsky, the Santa Clara County chief assistant district attorney, did not dismiss the possibility of officially considering the incident as a hate crime.

"There's no hate crime allegation charge at this point in time for one reason only, the matter is still being investigated," he said.

Boyarsky said Peoples targeted at least one or two people based on his "view" of what the victims' race or religion may have been.

The prosecutor only described the new evidence as "very appalling and disturbing."

Suspect is an army veteran headed to Bible study

Peoples was on his way to his Bible study group after picking up some food on Tuesday, according to investigators, when police said he ran over a group of people walking on a sidewalk.

The victims, men and women, ranged in age from 9 to 52. At least one of them, a 13-year-old girl, remains hospitalized Friday in critical condition, police said.

Witnesses told investigators that after the incident, Peoples could be heard saying something akin to thanking God or Jesus, Ngo said. But he didn't exhibit that behavior when he was arrested, Ngo said.

Peoples, a Sunnyvale resident who was born in San Francisco, was arrested at the scene of the crash. Police said he served in the Army between 2004 and 2006, and was honorably discharged. He then served in the Army reserve until 2008. He has been working as a Department of Defense contractor as a finance auditor.

Sunnyvale is about 9 miles west of San Jose, California.