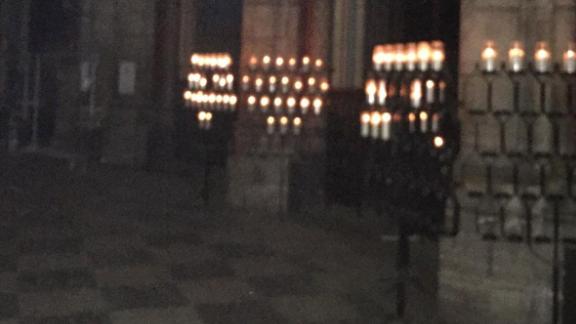 CNN's Nic Robertson obtained exclusive videos and photos from the ground that show the damage inside Notre Dame Cathedral after the fire.

Our hearts are aching as Notre Dame cathedral sits amid its own ashes this morning. As the world looks to rebuild, we'd love for you to share your memories of the Paris landmark. Click here to tell us what Notre Dame has meant to you. Here's what you need to know to Get Up to Speed and Out the Door. (You can also get "5 Things You Need to Know Today" delivered to your inbox daily. Sign up here.)

The fire has been extinguished at Notre Dame, but it's left behind a smoldering hole in the heart of Paris. The beloved, nearly 900-year-old cathedral -- which survived plagues, a revolution and the Nazis -- caught fire yesterday in a blaze that stunned the world. Parisians and tourists watched helplessly from the streets, while the rest of us watched the destruction unfold on our TV screens and smartphones.

The cathedral's iconic spire toppled as the roof -- known as the "forest" because it was made from 12th- and 13th-century oaks -- collapsed into the church's interior. But firefighters, after nine hours of battle, managed to save Notre Dame's famed facade and towers, and a host of the cathedral's invaluable works of art and artifacts also survived the flames. French President Emmanuel Macron vowed to rebuild and said an international donation plan would be started today to raise the funds.

Notre Dame is more than just a Catholic church. It's also a major tourist attraction that's one of the first things visitors want to see when they step into the City of Lights. Travelers the world over have filled up social media with their stories, pictures and memories of visits to the cathedral. Here's what they've shared with CNN. Keep up with the latest updates here.

The redacted version of special counsel Robert Mueller's report on the Russia investigation is expected to be released Thursday morning. Will that quell the fury that Democrats have directed at Attorney General William Barr ever since he put out that four-page summary of the nearly 400-page report? Probably not. The Dems will still want to see the full, unredacted report. Barr said the report cleared Donald Trump's 2016 presidential campaign of colluding with Russia and noted that Mueller did not reach a conclusion on whether the President obstructed justice. Here are nine unanswered questions the report might address.

We have a new challenger in the race for President -- and it's not a Democrat. It's former Massachusetts Gov. Bill Weld. He's the first Republican to challenge President Trump in the 2020 race. Weld, the 2016 Libertarian Party VP nominee, is no fan of the President and told CNN's Jake Tapper he would "fear for the republic" if Trump were re-elected. But Weld faces an uphill battle to get to the White House. Trump's approval rating right now with Republicans is almost 90%.

Who shot a woman with a crossbow while disguised as a delivery person? That's the question police in Ontario want answered. A 44-year-old woman was almost killed in November after the suspect shot her at point-blank range after she answered her front door. She was severely injured and will be in a "recovery phase for the rest of her life," a police official said. Video footage of the suspect, who hid the crossbow in a large box, was just released in hopes the person can be ID'd.

The measles crisis just keeps getting worse. The number of cases in the US jumped to the second-highest level in a quarter century. And there were more than 110,000 cases worldwide over the first three months of this year, the World Health Organization says. Keep in mind, the number of measles cases actually is probably higher, because the WHO says only about 1 in 10 cases is reported to the agency. Measles was considered eliminated in the US in 2000, but the number of cases has surged in recent years. Experts blame the rise of the anti-vaccination movement.

Georgia Engel was best known as the sweet Georgette on "The Mary Tyler Moore Show," but the talented actress made her mark on the stage, too. She died at the age of 70.

Micah Herndon's legs gave out on him near the end of the Boston Marathon, so the ex-Marine crawled to the finish line.

James Bond will need to keep a list of charging stations, now that Aston Martin has produced its first electric car.

Not all heroes wear capes

Meet the Kansas couple who adopted seven siblings who had been split up in foster care.

Want to get water out of the moon? NASA says it can happen when meteorites strike it.

The number of hours a day Alibaba founder Jack Ma thinks you should work to survive in China's tech industry. Oh yeah, he also advocates doing this six days a week.

"It's crazy 'cause now my business is your business."

Talk show host Wendy Williams, who talked about her divorce for the first time during her popular "Hot Topic" segment, which focuses on celebs and their private lives

It only took this guy two hours of his life to pull off this 12-bounce trick shot. (Click to view.)