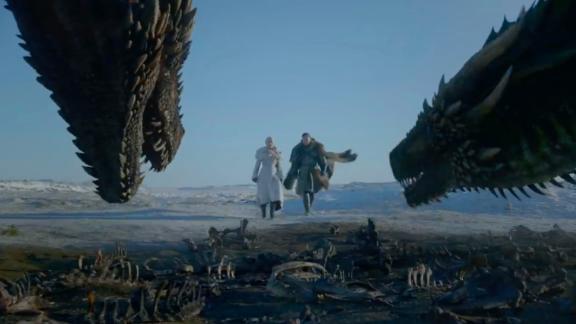 From Jon Snow learning his parentage to Bran seeing someone from his past, the season eight premiere of "Game of Thrones" had some awkward moments.

A sex scene on "Game of Thrones" doesn't normally constitute news. Sex is practically punctuation for the HBO series -- more noticeable in its absence than its presence.

But this week's episode, which saw Arya Stark -- played by 22-year-old Maisie Williams -- do the deed for the first time with her long-time crush Gendry, has invited some extra attention.

In the scene, Arya first asks Gendry about his sexual experience (he's had sex with three women), then expresses her desire to have sex. She kisses him, takes his top off, pushes him onto some kind of sack, then orders him to "take your own bloody pants off." It's a powerful and refreshing piece of character development for Arya, but -- judging by the reaction of many viewers -- it also bears the weight of gendered expectations around virginity and sex on-screen, which we would do well to be rid of.

Some found it uncomfortable to see the former child character, who we first met in Season One at age 11, give such a visceral demonstration of her new maturity. Others celebrated seeing Arya assume agency in a show which habitually objectifies young women, uses their bodies as political currency and often deploys sex as a weapon against them.

And still others expressed surprise that the keen assassin even wanted to have sex at all -- isn't she satisfied by all that killing she seems to enjoy so much?

Arya, HBO assures us, is now 18. She's spent most of her time in Westeros until now taking brattish, bloody vengeance on her enemies. Were she male, the audience might assume that a virile young warrior would want to kick back and indulge between executions.

It shouldn't be surprising that Arya can contain more than one urge in her human body. But as even Williams pointed out in an interview about the episode, much of the value of this scene was in proving her humanity -- "an emotion we've never really seen her engage with." Though she had obviously grown into a young woman before our eyes, her sexual desire wasn't a given.

Arya's latest escapade is nevertheless a welcome step in the right direction. Historically, for blockbuster films and TV shows -- including "Game of Thrones" -- straight (and usually white) men losing their virginity has been framed as a heroic high-five with adulthood. For straight women, it's often been a nerve-wracking rite of passage, which regularly sees them submit to male "expertise" during their "first time." "Titanic's" Rose DeWitt Bukater, "Twilight's" Bella Swan, "Gossip Girl's" Blair Waldorf, half the cast of "Cruel Intentions" and so many more millennial role models were shown the way by "worldlier" male counterparts.

Even Daenerys Targaryen's initial discovery of her sexual power -- after losing her virginity through rape in season one of "Game of Thrones" -- is made by way of learning to please the husband who raped her. In getting on top of Gendry, Arya bucked the trend of showing deference to a sexual partner -- and also dispensed with that ton of sexual anxiety we're trained to expect from young women.

The sense of jeopardy around the "first time," which for male characters is normally couched in immediate terms of performing well, is often portrayed as more profound for women and girls. The loss of virginity is rarely as simple as "having sex for the first time." Virginity is too often understood in heterosexual terms -- and for people in female bodies, penetrative sex with a man is often seen as the definitive means by which virginity is "lost" and a new womanhood "gained."

On-screen, this often comes at a price. In "Juno," the film's 16-year-old namesake gets pregnant the first time she has sex. On TV's "Buffy the Vampire Slayer," Buffy's boyfriend Angel loses his soul, and kills several of her friends, after she sleeps with him in Season Two. In the "Twilight" series, Bella's vampire boyfriend Edward makes it clear that there's a high probability he'll get over-excited and eat her if they get too intimate. Sometimes, as is the case for high school senior Lady Bird in the movie of the same name, the cost is the realization that her virginity just wasn't a big deal for her sexual partner.

Examples in which young women express simple curiosity and lust for their own sake are rarer than they should be. Even in an empowering scene where she was in charge, and in an environment brimming with sex, Arya justifies her request for intimacy. "We're probably going to die soon," she tells Gendry.

While that heightens the drama and eroticism of the moment, it still frames extreme danger as an excuse to ask the question. It's fair enough -- sex is a solid bucket list item, and legions of men heading off to war have used the same justification to persuade their lovers.

But one suspects Arya wanted to know what sex was like irrespective of the circumstances. And it would be more powerful still to see a young woman say she'd like to try sex with someone just because she wants to.

Sex on screen is undergoing a gradual evolution. Vulnerability and agency increasingly co-exist, and we are slowly seeing more examples of first-time sex that aren't heteronormative, patriarchal or defined by rape. Generation Z programs like" Sex Education" are taking up the mantle of millennial shows like "Skins," showing more diverse and nuanced takes on sexual exploration for all genders. It's taken time, but old-fashioned sexual cliché is slowly being eroded.

All things considered, it is strange that Arya's first foray into lovemaking on "Game of Thrones" should be so noteworthy. Just a few years ago, her older sister Sansa Stark's brutal rape on her wedding night -- when she was younger than Arya was during her sex scene -- was taken more in the show's stride. But Sansa's experience was apparently more in keeping with the series' tone.

But a young woman claiming her sexuality apparently still challenged some viewers who found it difficult to watch an adolescent have sex, in the knowledge that she hadn't always been adolescent. For young female audiences who are too often fed a diet of nerves and submission around first-time sex however, Arya's approach marks a welcome shift toward sexual autonomy. Hopefully, in the near future, examples like hers will no longer be seen as radical acts.

Amazon is removing QAnon merchandise from its site