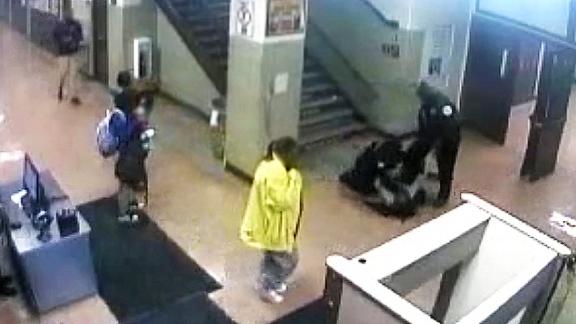 A father has filed a federal lawsuit after a newly released surveillance video shows Chicago police officers dragging his daughter down the stairs and punching her multiple times at a city high school. CNN's Ryan Young reports.

A father has filed a federal lawsuit after a newly-released surveillance video shows Chicago police officers dragging his daughter down the stairs and punching her multiple times at a city high school.

The incident happened on January 29 at the Marshall High School on the city's West Side, the lawsuit states, after the 16-year-old girl was asked to leave school because she had her cell phone out in class.

Her father had been asked to come to the school to pick her up and witnessed part of the incident, according to the lawsuit.

The video shows the student standing next to an officer before she turns to walk away. As she does so, one officer grabs her and moves her toward the stairs.

The lawsuit says the girl grabbed the officer's vest to avoid falling down the stairs, but as a result they both fell.

The video cuts to footage from another camera, showing an officer dragging the girl down the stairs by the leg while the second officer slides down the stairs on top of her.

As the girl lay on the ground at the bottom of the stairs, the video shows one officer stepping on her while the second officer punches her. She was also tased, the lawsuit says.

Laurentio Howard, the girl's father, is suing the city, the two officers and the Chicago Board of Education in the US District Court for the Northern District of Illinois, accusing them of violating her civil rights and physically abusing her without justification.

In an amended complaint filed Thursday, his attorneys argue that the new surveillance footage shows that the officers tackled the girl "without cause or provocation" and said the officers accused the girl of assaulting them when "she was actually trying to shield herself from the officers' vicious and unwarranted attack."

The video shows that the girl did not assault them as the officers had previously said, the lawsuit states. It's unclear what took place before the actions shown in the video.

After the incident, the girl was taken to a hospital for treatment, the lawsuit said, and was charged with "misdemeanor and felony crimes" -- charges that were later dropped.

The city of Chicago's lack of directives, oversight and standards pertaining to its police officers in its schools has resulted in the violation of students' civil rights and unnecessarily involved students in the criminal justice system," the lawsuit said.

In a statement, a spokesman for Chicago Police said the department holds officers "to the highest level of professional standards." However, it will "remain guided by the facts of the investigation," spokesman Tom Ahern said.

"Due to the fact that this incident is currently under the jurisdiction of COPA for the purpose of an independent investigation, we cannot comment on the specifics of the incident or the investigation," the statement added.

"CPS is committed to creating a safe and supportive learning environment for all students and we are deeply disturbed and troubled by this incident which has no place in our schools," she said.

"The CPS Office of the Inspector General is conducting a review of the situation upon the district's request, and we are fully cooperating in the investigation by the City's Civilian Office of Police Accountability," Bolton said.