How 'Game of Thrones' conquered TV with drama and dragons 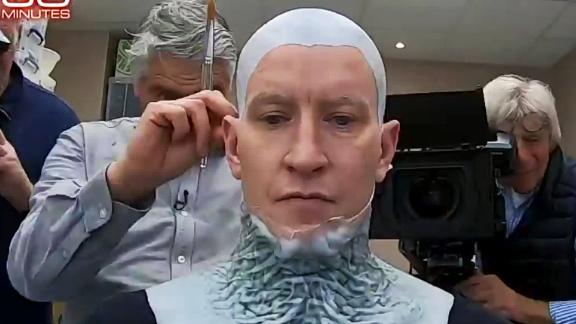 Anderson Cooper, reporting for "60 Minutes," transforms into a White Walker while behind the scenes of "Game of Thrones."

Those uninitiated in the "Game of Thrones" phenomenon must surely wonder what all the fuss is about, especially as the HBO drama becomes increasingly difficult to avoid in the build-up to its series finale. Dragons and debauchery, after all, don't sound like much of a breakthrough.

While there's seldom a simple explanation for why something catches on in Hollywood -- to quote the late screenwriter William Goldman, "Nobody knows anything" -- the show's popularity stems in part from how well it has bridged the gap between movies and TV, between theatrical blockbusters and dense serialized drama.

Related: 'Game of Thrones' is wrapping up and we have SO many questions we need answered

HBO has long since shed its old "It's not TV. It's HBO" slogan. But "Game of Thrones" managed to occupy a realm that falls somewhere beyond conventional TV, answering the question what it would look like if "The Sopranos" and "Star Wars" had a baby, with all the pop-culture hysteria that entails.

"Thrones" also had the benefit of being based on George R.R. Martin's popular novels, bringing a dedicated fan base along with it. Yet much like "The Walking Dead," the series took on a screen life of its own, and in this case actually lapped its source material, wrapping up the story before the author could get around to publishing it.

The keys to its appeal include a deft mix of character-driven drama and carefully layered on fantasy elements. Brilliantly cast, the show could flesh out its characters and story in a way that movies with similar mythological trappings don't have the time or latitude to develop.

Even if sex, violence and dragons aren't your cup of tea (or ale), "Thrones" accomplished what it set out to do --commercially as well as creatively -- in a manner that's virtually unmatched in terms of its scope and scale. In the process, producers David Benioff and D.B. Weiss have established a bar that will have executives plotting ways to devise what they can tout as "our version of 'Game of Thrones'" for years to come.

It's worth noting, too, that unlike movies, TV has a limited history of massive genre hits. Those that come to mind -- a la "Lost" or "The X-Files" -- were generally more rooted in contemporary reality than Martin's fantasy epic. (The aforementioned "Walking Dead" would be another sort-of exception but has failed to sustain a level of quality that would merit inclusion in that august company.)

The list is equally narrow in terms of premium cable shows that have achieved this sort of cultural reach and acclaim, with "Sopranos" ratings dwarfing other dramas that would join the qualitative part of that conversation, most notably "The Wire."

In the past, TV's bets on epics were largely confined to miniseries, which allowed networks to bill those projects as events. NBC, for example, enjoyed considerable success in the 1990s with adaptations of classic tales like "The Odyssey" and "Gulliver's Travels."

"Game of Thrones" rolled all of that up into a ball and delivered it on a weekly basis -- 10 episodes at a time, through its first six seasons -- yielding a theatrical-quality spectacle that will encompass 73 chapters when all's said and done.

Admittedly, the volume of coverage and praise currently being showered on the show are motivated in part by clickbait, and trying to latch onto the franchise's sizable tail.

Even so, the attention isn't unwarranted. "When you play the Game of Thrones, you win or you die," the character of Cersei, played by Lena Headey, said early in the show's run. "There is no middle ground."

Go big, in other words, or go home. And the series has won, in a big way, by finding the sweet spot at the nexus of drama and dragons.

"Game of Thrones" begins its final season on April 14. Like CNN, HBO is a unit of WarnerMedia.