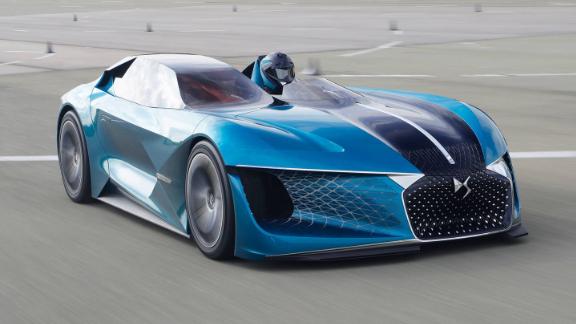 DS Techeetah unveiled its DS X E-TENSE, an electric supercar like no other.

Under the sunny skies of Sanya last time out, DS Techeetah became the sixth different Formula E team to have a driver top the podium in the six races so far in this wildly unpredictable season.

And it couldn't have been more perfectly timed -- thanks to a scintillating drive from reigning champion Jean-Éric Vergne, the Chinese outfit was able to celebrate an ePrix victory on home soil.

READ: How to drive a 225kph electric race car

Ahead of Saturday's Rome ePrix, Techeetah will be hoping it can become the first team to win multiple races this season having secured a podium place at the same race last year.

Manufacturer DS, partner and sponsor of Techeetah this season, has also been hard at work away from the track.

And in keeping with Formula E's message of sustainability, DS's supercar of the future -- the DS X E-TENSE -- is now being test driven as the company targets a 2035 release.

Last month, CNN Supercharged presenter Nicki Shields had the chance to drive the futuristic car around the Sanya track.

The unusual asymmetric, three-seat vehicle has been designed with two different engines, one for race tracks and one for road use.

When on the road, driverless mode can be selected and and the passenger can sit inside the car's cosy-looking 'cocoon,' while drivers on the race track are exposed to the elements.

The car's suspension has been engineered by DS Performance -- the technical team behind the manufacturer's Formula E programme -- while the vehicle body is "capable of recovering its original form after an impact," according to DS Automobiles.

Rimac say their car will boast a 403-mile range and be capable of reaching a top speed of 258mph.

Meanwhile, Tesla claim its Roadster -- expected to be available as soon as next year -- will have a range of 620 miles per charge.

But a SpaceX upgrade will be available to buyers, featuring 10 small rockets that will increase top speed and acceleration.

Watch the video above to see DS X E-TENSE in action.

Amazon is removing QAnon merchandise from its site