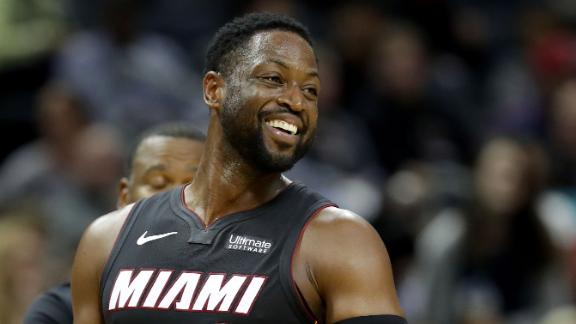 Budweiser's emotional advertisement reminds everyone that Dwyane Wade, who is completing his final season, has had an impact off the court that's been just as profound as his game on the court.

Budweiser's deeply emotional advertisement reminds everyone that Dwyane Wade's impact off the court was just as profound as his game on the court.

Wade's #OneLastDance tour-- what he's calling his final season -- is coming to a close; while not officially out of the NBA playoff chase, the Miami Heat's chances seem unlikely.

Before Wade plays Tuesday night in what is likely his final game for the Heat at American Airlines Arena, Budweiser has released an advertisement honoring him.

The ad touches on the jersey swapping Wade has become known for in his final season; he's gifting opposing players and soon-to-be-former adversaries his jersey after games.

But this time, the tables are turned on the 16-year NBA veteran, who does not know who will appear in the ad.

Each person walking out of the darkness of a dimly lit basketball court instead present Wade with a piece of clothing that's significant to them.

His mother, Pastor Jolinda Wade, recounted the difficult times Wade and that he and his family had to endure while growing up in Chicago and how Wade in recent years bought her a church at which she could preach.

She gifted him her ministry robes.

"I am more proud of the man you have become, than the basketball player," she says to her son in the video. "You are bigger than basketball."

When Merrilyn Beard-Breland's Florida house burned down in 2010, the gifts for 10 children and two grandchildren went up in smoke, too. Dwyane Wade gifted the family with a $1,000 shopping spree.

Beard-Breland gifted him a shirt she made.

"You're not Wade the basketball player -- the legend," Andrea Oliver says to Wade in the video. "You're the human being that took the time and on his on wrote my brother's name on his shoe."

Wade dedicated the remainder of his 2017-2018 NBA season to Oliver's brother, Parkland school shooting victim Joaquin Oliver. Wade was Joaquin's favorite player; she gave him the jersey Oliver wore in his final championship.

Tamar Johnson gave Wade her graduation cap and gown. Wade paid for her scholarship to Marquette University; she was the first person in her family to graduate from college.

When Danny Arzu met Wade at one of his basketball camps at Miami's Overtown Youth Center, he says his life changed. That experience inspired him to not only rise up, but to give back to his community as a mentor at the center.

He gifted Wade the suit jacket he wore to his first job interview.

While the full film is four minutes, Budweiser tells CNN it will be airing a 90-second version on the local broadcast of Tuesday's game.