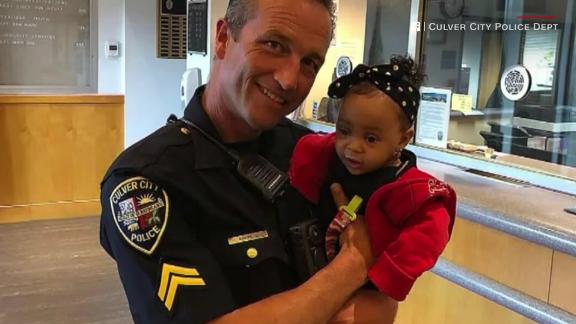 Harrowing bodycam footage shows an officer save the life of a choking 9-month-old baby.

When you start your day as a police officer, saving a baby's life isn't always on the agenda. But one mother will always be grateful to Culver City Police Officer Brian Cappell for doing just that.

He responded to a call in late March of a baby who was "unconscious and not breathing," the department said. He arrived from just a street away from the incident and heard Harley's sister calling him. He followed her to the 9-month-old baby, who wasn't crying and had blood on her mouth, according to CNN affiliate KCAL/KCBS.

She had choked on a baby snack.

"The child's mother was inside the vehicle and understandably hysterical," the police department said. "Officer Cappell grabbed the child, who was silent and not moving and immediately began performing CPR."

"It always makes you nervous, but it's one of those things. But your training just kicks in," Cappell told KCAL/KCBS.

Body cam footage shows the officer turning the baby onto her stomach over his arm and striking her back.

He got her breathing shortly before paramedics arrived and took over.

"As soon as we heard that cry, it was like an angel," the baby's mother, Janet Lockridge told the affiliate. "It was like God sent his angel through him."

On Monday, Cappell was honored by the city council and had the chance to see Harley -- whom he said has one of the most beautiful smiles he's ever seen -- one more time.

"She would not be here if it wasn't for him. So we are grateful," Lockridge told the affiliate.