What is Barr trying to hide? 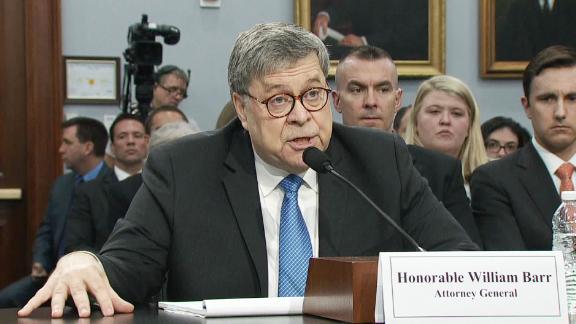 The Mueller report is coming. Attorney General William Barr notified Congress that he was "well along" in making redactions to the report, and expected to release the report by "mid-April, if not sooner."

But a big question remains: Just how much of Mueller's report will we see? Barr carves out several types of information that he might redact from it. On the uncontroversial end of the spectrum, Barr is in the process of redacting information about pending criminal investigations that Mueller has referred to other prosecutors -- Barr's confirmation of continuing investigations here is significant in its own right -- and sensitive intelligence materials. Such redactions are appropriate and necessary.

Then things get trickier. Barr says he will remove "information that would unduly infringe on the personal privacy and reputational interests of peripheral third parties."

But he should not hide behind the fiction that the DOJ follows an "indict or shut up" policy; in fact, the DOJ has released extensive negative information about uncharged people in high-stakes cases including investigations of Hillary Clinton and the Ferguson Police Department. And the "indict or shut up" theory should have no application to a sitting president who, under DOJ policy, should never be indicted purely by virtue of his position.

The major redaction battle will be fought over grand jury materials. According to Barr, Mueller served over 2,800 subpoenas seeking testimony and documents; all that information qualifies as grand jury material. Remove that much evidence from the report and it could end up looking like Swiss cheese.

But grand jury materials can be made public, if Barr only cares to try. In fact, in 1998, Independent Counsel Kenneth Starr obtained permission from a federal judge to disclose grand jury materials. Barr has the ability to make the same motion here, and Rep. Jerry Nadler, Democratic chair of the House Judiciary Committee, has offered to work with Barr to request permission from the courts to release grand jury information. (Note how Starr seemed eager to disclose such materials, while Barr already seems to be finding reasons to suppress them. I wonder why.)

Nadler also plans to authorize a House subpoena to obtain Mueller's full report, without any redactions. If the Department of Justice resists, we could end up in a legal battle pitting the legislative branch and its core oversight function against the executive branch.

In the interest of transparency and public confidence in the Department of Justice, Barr should put away his redaction pen and disclose as much of Muller's report as possible. Anything less will raise one big question: What is Barr trying to hide?

Ray (California): Doesn't Mueller have some unanswered questions? For example, the Supreme Court upheld a "mystery subpoena" to a foreign company. What happens to that?

Mueller leaves behind important, unresolved cases and investigations. Michael Flynn still awaits sentencing, and Rick Gates continues to cooperate with prosecutors on "several ongoing investigations." Roger Stone will stand trial in November, during which we should learn which "senior Trump Campaign officials" contacted Stone to "inquire about future releases" of hacked emails by Wikileaks.

Then there's the subpoena that Mueller served on an unknown foreign-owned company, which challenged the subpoena's legality. The courts upheld the subpoena, and the Supreme Court declined to take up the case, requiring the mystery company to comply. Mueller also has prevailed thus far in a legal fight over a subpoena on Stone associate Andrew Miller.

All of these open matters -- and likely more that are not yet publicly known -- will go to US Attorney's Offices for completion. Barr stated to Congress that he is in the process of redacting from Mueller's report "material that could affect other ongoing matters, including those that the Special Counsel has referred to other Department offices."

Indeed, a federal prosecutor in Washington DC last week confirmed that Mueller's grand jury was "continuing robustly" to investigate open matters. Perhaps most worrisome for Trump, Mueller previously referred the Michael Cohen investigation to the Southern District of New York, which now has a continuing probe into the Trump Organization and the inaugural committee.

Mueller's departure does not mean his investigations go away; it means they go to other prosecutors to finish.

Lisa (Connecticut): Could Barr decide to remove parts of Mueller's report based on executive privilege?

Executive privilege protects against disclosure of confidential communications between the President and his advisers. In his letter to Congress, Barr notes that Trump "has stated publicly that he intends to defer to me and, accordingly, there are no plans to submit the report to the White House for a privilege review."

Barr would pursue the latter scenario at the peril of his own credibility. Executive privilege belongs to the President, and it is not for Barr to assert it and do Trump's political bidding for him.

Further, Trump does not even appear to have a winning executive privilege claim. As the Supreme Court held in its unanimous 1974 ruling in the Richard Nixon case, executive privilege protects national security secrets but is not a generalized shield against presidential liability or accountability.

The stakes are high because many of the communications to which executive privilege might apply -- internal White House conversations about firing (or potential firing) of James Comey or Jeff Sessions or Mueller, for example -- go to the heart of the obstruction of justice question. If Barr redacts that evidence from the Mueller report, he will zip out some of the report's most important passages.

Michael (California): If a legal issue relating to Mueller's report goes to the Supreme Court, do you believe Chief Justice John Roberts will, as he seems to have done in the past, feel the weight of keeping the court above perceived political partisanship and side with the more liberal justices?

The Judicial Branch is the least political of our three branches of government. Federal judges are appointed, not elected, and once confirmed, they have lifetime tenure.

That said, it would be naive to assume that federal judges function in a political vacuum. They come into the job with ideological viewpoints, which often are the subject of confirmation hearings. And public perception of a purely apolitical Supreme Court took a permanent hit when the court split 5-4, along straight ideological lines, in the Bush v. Gore decision, which ended the contested 2000 election.

In late 2018, after President Trump lashed out at "Obama judges" on the federal appeals court that ruled against his travel ban, Chief Justice Roberts took the extraordinary step of issuing a public statement rebuking the President: "We do not have Obama judges or Trump judges, Bush judges or Clinton judges..."

Chief Justice Roberts plainly understands the growing public concern about partisanship in the federal judiciary, and cares about remedying that perception. With the recent replacement of Justice Anthony Kennedy with Justice Brett Kavanaugh, Chief Justice Roberts now sits between the conservative and liberal blocs of justices.

While I do not believe Roberts would depart from his deeply held judicial principles to avoid an appearance of partisanship, I also think Roberts does not want to go down in history as the chief justice who presided over politicization of the court. Remember, Roberts was the unexpected swing vote upholding the Affordable Care Act (Obamacare), and he could deliver another surprise if an issue related to Mueller's report comes before the Court.

Harry (Canada): If collusion wasn't the reason that some Trump associates lied about meeting or having contacts with Russians (and risked going to jail), then why were they lying?

Yes, people lie for a reason, and those reasons are almost always bad. The law recognizes this. At trials, judges instruct juries about "consciousness of guilt." Essentially, this is the commonsense notion that, where a person lies, the jury can -- but does not have to -- assume he lied because he knew he was guilty of the offense.

But those bad reasons are not necessarily criminal. Sometimes people lie for political reasons or personal reasons -- or for a combination of reasons. I suspect a complex combination of bad motives drove each of the now-convicted Trump associates to lie about their contacts with Russia: Fear that the Russian contacts might have been criminal, mixed with a desire to avoid the political repercussions (for themselves and the campaign) of those contacts. As with so many things, we will know more once we see Mueller's report.

While DOJ policy counsels against indicting a sitting president, a president can be indicted once out of office. But every crime carries a statute of limitations -- a time limit, starting from the day a person commits a crime, within which criminal charges must be brought.

There is, however, an important exception. In some instances, federal law permits "tolling" of the statute of limitations -- essentially a pause on the countdown clock. Tolling happens, for example, when a defendant is a fugitive or during the pendency of a request from the United States to a foreign country for evidence.

While the issue has never been decided in court, I believe prosecutors would have a strong legal argument that the statute of limitations should be tolled while the President is in office. Prosecutors might make the unusual argument that being president is, for legal purposes, the same as being a fugitive: In both cases, the subject cannot be charged and apprehended, through no fault of the prosecution. Essentially, prosecutors might argue, the President -- by virtue of his position -- hides from the law, in plain sight.

1. Will we finally get our first glimpse of the Mueller report -- not merely Barr's summary -- this week?

2. Will Nadler follow through with his subpoena to the DOJ for the entire Mueller report, potentially setting up a legal showdown, or will he wait to see what Barr discloses by mid-April first?

3. Will the White House continue to stonewall congressional requests for information relating to background checks and security clearances for Jared Kushner and others? If so, what steps will Congress take in response?