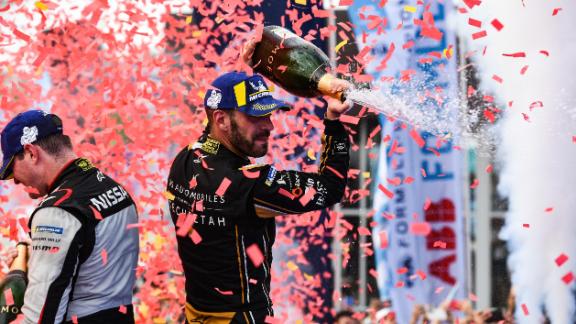 The unpredictable start to the Formula E season continued in Sanya as the sixth race brought a sixth different winner.

The unpredictable start to the Formula E season continued in Sanya as the sixth race brought a sixth different winner.

Defending champion Jean-Eric Vergne not only picked up his first victory of the season, but also ended his three-race run of failing to score any points.

The all-electric race championship was visiting the south China city for the first time and there was no shortage of drama with Sam Bird and Stoffel Vandoorne being forced to retire from proceedings in the opening stages.

Rookie Oliver Rowland had qualified in pole position and, like Vergne, the Nissan e.dams driver was searching to change a luckless run of form having last scored points at the season-opener in Saudi Arabia.

READ: Why the Formula E championship is so unpredictable

The two men battled it out at the front throughout the race, with the experienced Vergne finally breaking Rowland's resistance on lap 19 of 36.

Following a crash between Lucas di Grassi and Robin Frijns, the race ended under yellow flag conditions, allowing Vergne to cruise to his first victory since the final race in New York last year.

"Winning here in China as part of a Chinese team is unbelievable, especially with the last three races being difficult when we had no points," said the DS Techeetah driver.

"It's always good to come back on top. It will boost the confidence of myself, the team, and put us back as well in a good spot for the championship.

"I think that was the turning point of the season, we need to keep on doing good work and good races in the European season."

It was a stop-and-start affair in Sanya as a red flag was brought out and a 12-minute break enforced after BMW i's Alex Sims was left stranded in the track after colliding with the wall.

That was before Frijns careered into di Grassi's rear while passing Sebastian Buemi in the race's closing stages, a move that left the Brazilian seething as he was forced out of the race.

"You crashed together and you took me out of the race -- I hope you get a penalty," said an incensed di Grassi. "Next time, I'll get away from Robin. There was nothing I could do to avoid that."

The result saw Vergne almost double his points haul in the standings, shooting up to third behind Jerome d'Ambrosio and Antonio Felix da Costa, whose third place finish in Sanya took him to the top of the championship.

Victory in China was also Techeetah's first of the season 2018-19 when the new Gen2 race car has come into play, and Vergne admitted after his victory that he hadn't slept well since going a third straight race weekend without scoring any points in Hong Kong.

However, he'll now be able to rest easy with the assurance that he's back in the championship hunt as he bids to become the first man ever to successfully defend a Formula E title.

The next race will take place in Rome on April 13.

Allen County among counties with greatest decline in COVID-19 cases, hospitalizations across Indiana