Buy your own Italian paradise island from $1.1 million 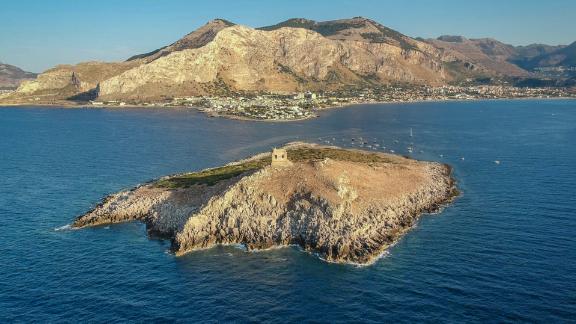 Isola delle Femmine is in the heart of a scuba diving and snorkeling mecca off the coast of Sicily. It could be yours for as little as $1.1 million.

Ever dreamed of owning your own Italian private island? An aristocratic family is selling one in Sicily for a lot less than the price of a Tuscan villa or a Manhattan loft apartment.

Isola delle Femmine, a wild pristine atoll near Palermo with a 17th century crumbling stone tower, is up for sale with offers invited of more than €1million -- about $1.1 million.

It's being sold by an aristocratic family which, like many others in Italy, is struggling to afford the upkeep of estates they've owned for centuries.

The uninhabited oval-shaped island is part of a protected marine park that's now an elite scuba diving and snorkeling spot.

Ancient Roman anchors and relics lie on the surrounding seabed. Its reef waters are inhabited by lobsters, sea anemones and madrepora stony coral. Solo swimming and sunbathing are guaranteed.

The island was originally on sale at a much higher price, but with no takers it's now been lowered to bargain rates.

"The price at first was €3.5 million but given nobody showed up we've now lowered it to a flexible range between €1 and €3 million, open to offers and negotiations," real estate agent Riccardo Romolini tells CNN Travel. "Anywhere close to €2 million we'd be very interested."

Isola delle Femmine lies just 300 meters from a mainland village which is named after it. Once upon a time the island was likely a peninsula, connected by an isthmus.

"Some crazy, fit people swim over from the village but there are often strong currents in that narrow stretch of sea, says Paola Pilo Bacci, a countess whose family has owned the island since the 1600s. "I take a rubber dinghy each time I visit to bathe and suntan alone or with a few friends."

Baci, an artist, has fond memories of childhood summers spent on the rocky isle and boasts how underwater adventures influenced her paintings of aquatic life.

"I loved diving with my mask to admire the stunning rocks and corals. The water is translucent and has a magical pull. The beauty and silence of the isle is enchanting. It's just you, the sound of the waves and seagulls crying."

Her ancestors used the island as a secret retreat where they could enjoy the sea-and-sun bliss far from noisy vacationers.

But times have changed and, for many of Italy's old aristocratic families, the cost of running such estates has become unbearable, especially if heirs have relocated and visit only during holidays.

"This fiefdom has always been a family jewel but there's no sense in hanging onto something we no longer use," Pilo Bacci adds. "A new owner could breathe new life into the isle and tower, which was majestic and deserves to be rebuilt."

It's not the only bargain being offered in Italy. Several Italian towns and villages have been selling off homes for as little as the price of an espresso in the hope of reversing a depopulation trend as young folk leave to work in cities.

There are ancient Greek and Roman stone and lime mortar basins once used to prepare a gourmet fermented fish sauce dubbed garum, alongside old wells and basins to collect rainwater.

The ancient tower rises on a tall grassy hill. It was part of a defensive network of look-out fortresses built to protect Sicily's coasts from Saracen pirate raids.

There's a 360-degree view from the top stretching to the island of Ustica.

The fortress was bombed by the Allies in World War II and was later used by the US Navy as a military outpost to patrol Sicily's northern coast.

"A re-style could turn it into an exclusive private residence or a lavish venue for celebrations and business events," says Romolini. "New owners can apply for tax incentives and funding from the European Union if they come up with a development project that respects the surrounding nature."

The tower is also being touted as a potential location for fashion shows or as an advertising tool for brands wanting to place their logo on the turret.

Isola delle Femmine translates from Italian as "island of women."

Legend has it that 13 Turkish maidens cast adrift by their families as punishment for misdemeanors took refuge on the island after their boat was hit by a storm. They lived there happily ever after.

The tales have given rise to spooky sightings.

"People say they've seen the ghost of a girl happily strolling along the beach, singing and dancing, but these are just stories," says Pilo Bacci. "The name stems from Latin and simply means 'island of frontier,' a safe haven of protection from the open sea."

The shores are made of tiny white pebbles and there's one sandy beach with a little cove to park dinghies and fishing boats.

There's a rich eco-system of birds and over 120 plant species. The typical Mediterranean landscape is dotted with bright purple-white Iris flowers and is home to hares and unique colorful butterflies.

The fertile grass and shrubs are believed to have healing properties and regenerate quicker than on the mainland.

"My grandparents used to tell me about a cattle breeder who rented the island and each day brought his cows on a boat to graze freely and eat the healthy plants, taking them back home at sunset," says Pilo Bacci.

As there aren't many tall trees blocking the view the panorama can be fully enjoyed.

Open green spaces and silence make it a perfect spot for an unplugged, detox break.

One of Bacci's ancestors, a revolutionary who joined forces in 1860 with Giuseppe Garibaldi to free Sicily from control of the Spanish Bourbon dynasty, loved spending time under the tower.

He would escape to his secluded paradise to meditate and write.

"He was such a popular public figure he felt the constant need to get away from the madding crowd," adds Pilo Bacci. "This place inspires some serious soul searching."