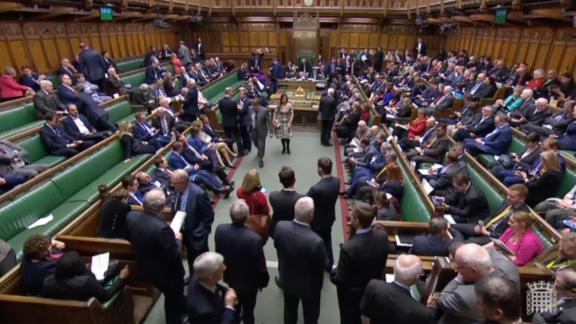 UK lawmakers have rejected a move to give the British public a second referendum on Brexit.

UK lawmakers have voted in favor of delaying the Brexit process, acknowledging that more time is needed to break the deadlock over Britain's departure from the EU. But they decisively rejected a call for a second referendum.

Prime Minister Theresa May will now ask European leaders to grant an extension to Article 50, the legal process under which Britain is leaving the European Union. Unless a delay is approved by all 27 remaining EU leaders, Britain is heading for a chaotic exit on March 29.

May had reluctantly agreed to support a delay, after the House of Commons overwhelmingly rejected her imperiled withdrawal deal earlier this week. However, her offer is conditional on Parliament approving her plan when she puts it before MPs for a third time next week. She faces a monumental effort to turn around the huge opposition to the deal within her own party.

MPs approved her plan to postpone Brexit by 412 votes to 202. But in a sign of the divisions that continue to plague her Conservative Party, eight Cabinet ministers and 188 of her MPs -- more than half her parliamentary bloc -- voted against it.

Minutes after wrapping up the debate for the government, in which he urged Parliament to support the delay, her Brexit Secretary Stephen Barclay did exactly the opposite. It was a striking act of defiance by the Cabinet minister responsible for delivering the Prime Minister's Brexit strategy.

In a rare moment of victory for Britain's embattled leader, May saw off a proposal for Parliament to take greater control of the Brexit process. A plan for MPs to seize control of parliamentary business next week, in order to vote on alternative Brexit plans, was rejected by two votes.

She was also buoyed by an emphatic defeat for supporters of a second Brexit referendum. MPs voted 334 to 85 against a second vote, after the opposition Labour Party told its MPs to abstain.

May still faces a huge battle to overturn Tuesday's 149-strong majority against her deal. She must persuade 75 MPs to change their minds if she is to avoid further attempts by MPs to force an alternative Brexit plan on her government.

The Prime Minister has warned that, if MPs reject her deal a third time, a longer delay to Brexit will be required. That would force the UK to take part in elections to the European Parliament in May, and to continue paying in to the EU budget.

The threat of an extended delay to the UK's departure could help focus minds among Brexit-supporting lawmakers, including the 10 Democratic Unionist Party (DUP) members who prop up her ruling Conservative Party.

May also hopes that her Attorney General, Geoffrey Cox, can give further reassurances on the most contentious part of the deal, the so-called Irish backstop. There is no prospect of the EU agreeing to any changes to the deal.

More than two years since Britain voted to leave the EU, its politicians are as divided as ever on how to move forward with Brexit.

The lack of clarity has soured the mood in Brussels. Some EU leaders have indicated their wariness to grant May an extension or renegotiate her deal.

French President Emmanuel Macron said on Thursday any extension to Brexit could only be "a technical delay to allow more time to put their departure in place."

Macron, who is currently in Kenya, added that the UK would need a purpose for the EU to grant any extension, so as "to ensure something will come out of it."

But European Council President Donald Tusk said on Twitter that he would appeal to the 27 EU leaders "to be open to a long extension if the UK finds it necessary to rethink its Brexit strategy and build consensus around it."

The EU responded cautiously to Thursday's developments. "We take note of tonight's votes," an EU Commission spokesman said. "A request for an extension of Article 50 requires the unanimous agreement of all 27 member states. It will be for the European Council (Article 50) to consider such a request, giving priority to the need to ensure the functioning of the EU institutions and taking into account the reasons for and duration of a possible extension," the spokesman added.