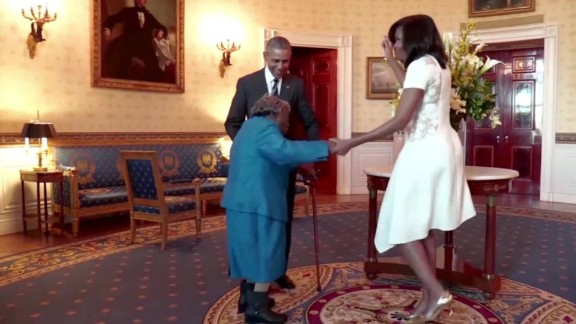 The woman who danced with joy when she met President Barack Obama and first lady Michelle Obama at the White House turns 107. CNN affiliate WJLA reports.

Want to go to Europe -- but you're on a budget? Check out this list of the continent's most affordable cities. And here's what else you need to know to Get Up to Speed and Out the Door. (You can also get "5 Things You Need to Know Today" delivered to your inbox daily. Sign up here.)

It's being called the biggest college admissions scam ever. Fifty people -- including rich parents, famous actresses, college prep officials and coaches -- are accused in a federal indictment of participating in a scheme to get students into top-notch colleges. Here's how the scam allegedly worked: Parents paid a college prep organization to take tests on students' behalf or correct their answers. The organization also bribed college coaches to get the students into desired schools as recruited athletes, even if they didn't play sports, prosecutors said.

The biggest names caught up in this include actresses Felicity Huffman and Lori Loughlin. Prosecutors say they have Huffman, a one-time Oscar nominee, on tape talking about the scheme. The charges against them have spurred a lot of "Desperate Housewives" and "Full House" jokes, but this is no laughing matter. A senior academic adviser at the University of Minnesota says this cheating scandal is just the tip of the iceberg. And this may be the craziest thing: Some of the accused allegedly paid enough in bribes to finance a full college education! Get the latest on the case here.

The pilot of the Ethiopian Airlines flight that crashed over the weekend was wrestling with "flight control problems" before the plane went down, the airline's CEO told CNN. A number of nations have temporarily banned Boeing 737 Max jets from flying in their countries as authorities continue investigating the air tragedy. And many still wonder if there's any link between this crash and October's Lion Air disaster, when another 737 Max 8 flight went down in the Java Sea, killing 189 people. Right now, 737 Max planes are only flying in the US and Canada. Boeing says the planes are safe. But some in Congress aren't so sure, and the Senate plans to hold an air safety hearing.

Among the 157 people killed in the Ethiopia crash was an entire family from Canada. Kosha Vaidya, of Ontario, was taking her teen daughters to Kenya to show them where she was born. Vaidya's husband and parents also died in the crash. Click here for the latest updates.

The United Kingdom is set to leave the European Union in just more than two weeks, yet uncertainty over the exit couldn't be higher. Lawmakers again voted down Prime Minister Theresa May's Brexit departure agreement, so today they will vote on whether to simply leave the EU without any deal at all. Many have predicted this no-deal Brexit would be a disaster for the UK's economy, leading to turmoil at ports, food supply disruptions and medicine shortages. If today's vote fails -- and most observers think it will -- lawmakers will vote tomorrow on delaying Brexit for a couple of months. Click here for answers to the key Brexit questions you've always wanted to ask.

A man has been arrested in the slaying of a young girl whose body was found in a duffel bag near Los Angeles. But plenty of questions remain about the death of 9-year-old Trinity Love Jones. Emiel Lamar Hunt, 39, was charged in the crime, but authorities haven't given a motive or cause of death in the case. Hunt reportedly was the boyfriend of Trinity's mother. A second person was also arrested, but no other info was released about that person. Hunt's bail was set at $2 million.

Spring may be just a week away, but Old Man Winter isn't going quietly. A "bomb cyclone," an intense and ferocious winter storm, will strike the nation's midsection today. It'll bring blizzard conditions and the risk of flooding and hurricane-force winds to the Rockies, Upper Midwest and central-northern Plains. Some 70 million people are in this storm's path, including about 45 million facing a high wind threat and 15 million facing a flood threat.

Odell Beckham Jr. got traded to Cleveland? Now, the Browns are Super Bowl contenders? Excuse me, I need to lie down for a minute.

A New Jersey man's voicemail is full because his sons put up a billboard with his picture and cell phone number, asking folks to wish him a happy birthday.

Virginia McLaurin danced with a president and first lady at age 106. How is she going to top that as she turns 110?

Give me the rose

"The Bachelor" ended its latest season last night, and of course Colton Underwood, the latest man of the moment, pulled off a finale shocker.

Paul Manafort, Donald Trump's ex-campaign chairman, will be sentenced on conspiracy and witness tampering charges. He could get up to 10 years in prison.

The number of measles cases reported so far this year, according to the CDC. There were 372 cases in all of 2018.

It's cute puppies playing in the snow. Really, what else do you need? (Click to view.)