Tornado survivor says she missed the onslaught 'by minutes.' Not 'one chance' we would have survived 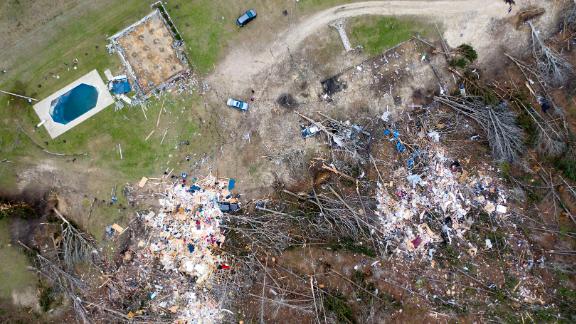 In an interview with CNN's John Berman, Jessica Chandler talks about she and her children narrowly avoiding the tornado that tore through their Alabama home, injuring her boyfriend.

Jessica Chandler and her four children weren't home when a tornado tore through their Alabama neighborhood on Sunday and destroyed their house.

She was at a grocery store buying baby formula for her youngest child, a 4-month-old, and missed the onslaught "by minutes."

An aerial view of her home before and after the storm shows the devastation.

Her house is "completely gone," Chandler told CNN's "New Day" on Tuesday. "Our house is not there anymore. It's far away from where it used to be.

"Thank God I was not there with my children," she said. "I don't think there's one chance me and my kids would have survived that."

The deadly tornadoes that tore through Lee County and other parts of the state on Sunday killed 23 people and injured dozens more.

Chandler's boyfriend was at the house, she said, and got caught in the tornado's fury.

He saw the front porch fly up and he dove for a couch. He "held on to the couch for dear life," and then he flew up in the air.

"When he landed, he landed on a tree," Chandler said.

"He immediately got up with the adrenaline rush and ran to find his parents who were in the home next door to us. They had just enough time to dive inside of their bathtub and he was able to somewhat unbury them. He was able to flag down a truck and some guys helped him get all the stuff off of his parents so they could get them out safe," Chandler said.

"He's pretty banged up. Really sore. He said that he heard some loud noises. He didn't even know that there was bad weather in the area. I didn't know, either," she said.

Chandler said her boyfriend was treated and released from a hospital.

What now for her and her family? She said a lot of people in the community are donating clothes and food. The family is in a hotel and her mother started a GoFundMe site to help them out.

"My mom told me there was supposed to be bad thunderstorms, possible tornadoes. But I mean, we hear that quite often whenever it rains bad down here," she said. "I had no clue what was coming. No clue. I didn't hear sirens or anything," she said.