Tensions mount in Venezuela as Guaido seeks return to country 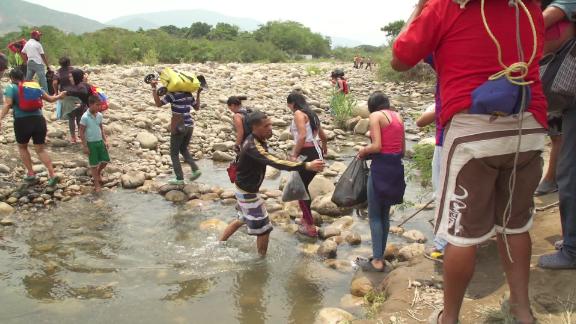 Following clashes and closings at Venezuela's borders, CNN's Nick Paton Walsh watches as scores of people cross the Colombia-Venezuela border to bring food back for loved ones.

The four men in green walk calmly down the street, to gentle clapping from the people around them. They appear to be defectors, shown on a video posted to social media from Wednesday in the town of Herran, Colombia. While CNN has not been able to verify the video, the scene is now a common one in Colombia, from a steady drip of Venezuelan soldiers that have given themselves over to Colombian immigration officials over the past week. As of Thursday, an astounding total of 567 had defected.

This is perhaps the most enduring sign of change since the world was startled by clashes last weekend, when Venezuelan opposition protesters tried to force humanitarian aid into the country over border crossings, past Venezuelan riot police and pro-Maduro gangs.

Now, military defectors have crossed over with stories of hunger, corruption, and abuse. The closure of the Simon Bolivar International Bridge at the border has not just increased tension between the Venezuelan National Guard who police it, and the Colombian police who have endured tear gas over the past week; it has also robbed many Venezuelans on the other side of the border of their livelihoods.

Thousands of Venezuelans come into Colombia daily to work, or buy food to take back. The crossing was a lifeline. And now that it is closed, along with the rest of the border between Venezuela and Colombia, the anger builds.

So what's next for this standoff? Diplomatically, the path ahead is predictable. Russia's support of President Nicolas Maduro is unwavering, rhetorically at least. Analysts question Moscow's desire to fund and assist what many say is a chaotic and corrupt kleptocracy on the other side of the world indefinitely. But for now, their veto at the United Nations prevents resolutions that could further corner the Maduro government, and assures the Cold War nature of this standoff continues to distract from the humanitarian crisis at its heart.

European states and most of Venezuela's neighbors tend to oppose Maduro, and support self-declared interim president and opposition leader, Juan Guaido. Yet they are hesitant over fiercer sanctions, or to entertain military intervention as an option.

The US appears on a steeper trajectory, applying fresh sanctions to Maduro's inner circles, and refusing to rule out military intervention. High-level officials including US Vice President Mike Pence and special envoy Elliot Abrams made trips to the Venezuela-Colombian border last week in support of Guaido, and even Guiado doesn't want the US military option off the table.

It's unlikely it will get to that. But make no mistake, the temperature is rising. Some opposition activists say that is the point of the constant deadlines and showdowns: to elevate the brutality of the Maduro government in the world's eyes, and to speed more direct steps against it. The next possible crisis point comes this weekend with the planned return of Guaido to Venezuela.

Guaido burst into the spotlight about a month ago, turning from obscure opposition politician to global figure in a matter of weeks. Many of his team are energized and optimistic, but they know that the situation is very new to them, and fast moving.

Last week, as his aid delivery campaign ramped up, Guaido crossed the border into Colombia. Now he seeks to re-enter his country after meeting the presidents of Colombia, Brazil, Paraguay, and Ecuador. He will enter Venezuela by Monday, he says -- an echo of last week's failed deadline for aid to cross the border. The question is: How?

Guaido violated a travel ban ordered by the Supreme Court when he left Venezuela. That, coupled with his increased profile, makes an arrest upon his return a possibility. A land crossing around the Colombian border town of Cucuta would be easy to do covertly, as he did when he left a week ago, but it would require a long and dangerous drive to the capital Caracas, where he could be targeted by pro-Maduro gangs or security forces. A commercial flight into Caracas airport could simply be turned around by the Venezuelan authorities, and refused permission to land. No choices are good.

Yet he must return, or he risks becoming a leader in exile. Again, there are cynics who say this is the point of his return trip -- that he knows it may fail, and will serve to emphasize the Maduro government's intransigence if it denies Guaido's freedom of movement. Were he arrested on his return, the same point would be made. The White House has explicitly said that any harm or restriction of Guaido's movement will be met with a firm response.

And so we enter another weekend of crisis, ahead of Monday's deadline. But the longer tension builds, the less likely a negotiated solution between Maduro, Guaido and their backers becomes, and the inevitable and ugly march towards a darker episode in this crisis is assured.