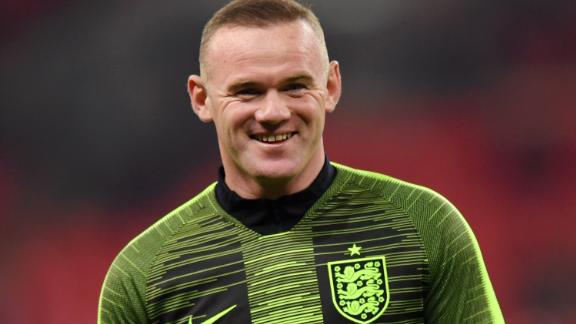 Former Manchester United forward Wayne Rooney talks to CNN about his move to America and if his new team, DC United, can challenge for the MLS title.

With a steely look of determination in his eyes Wayne Rooney takes a moment to compose himself before stating his intentions for the coming campaign with DC United.

"We want to win. We want to win the title," said the former England captain to the assembled media in Los Angeles ahead of the 24th MLS season.

While many players of Rooney's caliber would be content to rest on their laurels in the latter stages of their careers -- and, admittedly, some foreign stars have seemingly moved to Major League Soccer in America with that mindset -- the 33-year-old wants to transform DC United into winners.

"The priority is to make the playoffs and then try and win the title," Rooney, England's record goalscorer, told CNN.

It would be folly to bet against him achieving that aim, considering he carried his team -- Rooney joined midway through last season -- from rock bottom of the Eastern Conference to a playoff spot. Ironically, he would miss a penalty in a shootout defeat in the playoffs at home to Columbus Crew.

Read: Rooney: 'I can still play in Premier League'

The striker seems proud of his team's progression but emphasized that he and his teammates are seeking to improve.

"I think for us all, there's things which you can tweak and make better, whether that's personally or whether that's a team effort ... And we are continuing to do that to keep improving," he said.

Rooney's move from the EPL to MLS might have raised some eyebrows but he quickly, and arguably unsurprisingly, settled into life in the league, scoring 12 goals and contributing seven assists in just 20 appearances.

If there was an example which encapsulated the Englishman's dogged determination, it was an extraordinary passage of play in the dying moments against Orlando City last August, where after saving an almost certain goal with on-the-line defending he raced upfield and produced a cross which led to the winning goal.

While he has won every major honor in English football, the Liverpool native does admit he was impressed by the football on show in the US.

"I knew that it's a very competitive league," Rooney said.

"I was probably a bit surprised, if I'm being honest, to the amount of quality which is in the league ... I didn't realize how much quality there was in the league player-wise. So, yeah, I think the league is at a very high standard."

And Rooney has settled into life in Washington D.C. equally adeptly, notwithstanding the headlines surrounding his arrest on a charge of public intoxication in December after a flight (a Rooney spokesperson said he "took a prescribed amount of sleeping tablets mixed with some alcohol consumption and consequently was disorientated on arrival.")

"It's been good," the striker said. "It's different, obviously, to what we are used to back home. And the kids have settled in very well actually into school, into the after-school clubs they go to. I think it's gone as well as we could expect."

For the most part, Rooney and his family have become used to, dare one suggest, a normal lifestyle of sorts.

In his opinion, 95% of his spare time is spent with the children.

He said: "It's nice to be able to take them places and not have people constantly coming up ... sometimes it's nice to just have that time with your children without that happening, and that happens a lot more here, where I get that time to do things with my kids."

Rooney's form has been so formidable that, naturally, questions have cropped up asking if he left for the US too soon.

He smiles and laughs before saying: "If I'm being honest, I know quality wise, I can still play in the Premier League, I know that. I've always been a confident person, and so I have high expectations of myself ... I never doubted myself at all."

Nevertheless, he is happy to watch the EPL as a fan and happier still with the resurgence of one of his former clubs, Manchester United.

While Rooney is of the belief that the eventual full-time replacement for Jose Mourinho could be Tottenham manager Mauricio Pochettino, he pays tribute to interim boss Ole Gunnar Solskjaer, who played with Rooney at Old Trafford.

Victory over Crystal Palace Wednesday was United's 12th victory with Solskjaer in charge and eighth successive win away from home, a club record. After struggling under Mourinho, United is now in contention for a top-four league finish.

"Ole Gunnar's a fantastic person, if you play with him ... I pass advice on, which Ole Gunnar gave to me, which I pass on to some of the younger players now.

"I remember when I was a young lad, I was on the bench, and I was sat next to Ole Gunnar, and he said to me, 'just keep watching the strikers and the defenders and watch them, watch their movements, and keep visualizing what runs you can make when you come on.'"

But while a reunion between Rooney and Solskjaer might not be on the cards, the Englishman now making a life for himself and his family in America still has his sights on setting and scoring goals.