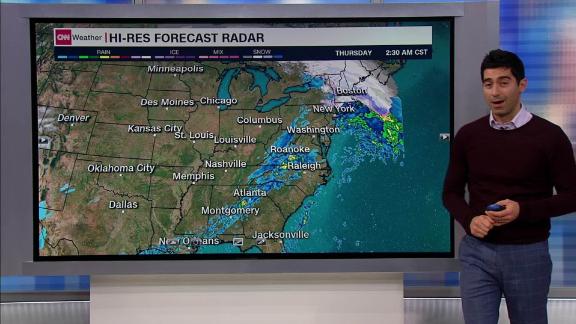 Winter storm watches and warnings cover the US from coast to coast, as snow and ice move into the Northeast Wednesday. Washington, Philadelphia, New York and Boston are all expected to get a mixture of wintry precipitation.

If you live in the eastern half of the US, get ready for snow. And sleet. And freezing rain. And flooding. (Spring can't get here fast enough.) Here's what else you need to know to Get Up to Speed and Out the Door. (You can also get "5 Things You Need to Know Today" delivered to your inbox daily. Sign up here.)

We've had so many blockbuster stories during President Trump's term, it's easy to get kind of numb to them. But we shouldn't. Some allegations against this President are truly extraordinary. Like this: The ex-acting FBI director thinks it's possible the President of the United States is a Russian asset.

Andrew McCabe, who took over running the FBI after James Comey was fired, told CNN's Anderson Cooper that last night. McCabe said it's why he took the mind-boggling step of opening an obstruction of justice investigation against Trump after Comey was fired. McCabe believes Trump is undermining the country's top law enforcement agencies for political gain. White House counselor Kellyanne Conway dismissed McCabe and his allegations, calling him "a liar and a leaker."

But that wasn't the day's only bombshell. The New York Times reported that the President late last year asked then-acting Attorney General Matthew Whitaker to put a Trump ally in charge of the Michael Cohen investigation, which is led by the US Attorney's Office for the Southern District of New York. The Times said there's no evidence Whitaker acted on this alleged request, and Trump denied the report when asked about it by a reporter.

Venezuela's embattled government closed down a maritime border and grounded flights as the opposition party seeks to import foreign aid. People in the country are struggling to get enough food and medicine, but President Nicolas Maduro's government is trying to stop any aid from getting in. He says the country doesn't need it. So, the maritime border with nearby Caribbean islands is blocked, and flights between the islands and western Venezuela have been shut down. Maduro earlier had barricaded bridges to stop trucks from neighboring countries from delivering aid. Conditions have been so dire in Venezuela that more than 3 million people have fled.

Last year, West Virginia teachers went on strike and won a 5% pay raise. Now, they've got another work stoppage underway because they're ticked off about a new education bill. The legislation would bring charter schools to the state and let some public money go to private school tuition. Amid outcry over the bill, lawmakers yesterday decided to "postpone indefinitely" any action on it. But union leaders say the educators don't trust the lawmakers, so they will go ahead and strike today anyway.

Bernie is back. Vermont Sen. Bernie Sanders says he'll run for president for a second time in 2020. He was the relatively unknown long shot who went far in 2016. Now, his campaign said it's raised more than $4 million just 12 hours after making his announcement. Sanders will run for the Democratic nomination, but remember, he's actually an independent who caucuses with Dems in the Senate. That was a sore point for some Democrats four years ago, so some think it's no coincidence that the Democratic National Committee plans to meet with 2020 campaigns next week to hand out an "affirmation form" for candidates to sign and certify they will run and serve as members of the Democratic Party. Sanders' campaign hasn't said if he'll sign it.

Is this climate change's first big casualty? A small brown rat in northern Australia is the first mammal known to have become extinct because of "human-induced climate change," the Australian government says. The rat -- the Bramble Cay melomys -- lived on a small coral island on the Great Barrier Reef. As late as the '70s, several hundred of the rodents were on the island, but they haven't been seen in almost a decade. A University of Queensland report blames the extinction on rising seas, which destroyed the rats' habitat.

Karl Lagerfeld was more than just the man who saved the House of Chanel. He was a visionary and an icon who redefined fashion. He died at age 85.

Falling for the firefall

Is that lava cascading over a cliff in Yosemite National Park? Nope, it's just a really awesome optical illusion.

The robots are coming

This AI program is so good at writing that its creators won't release it over fears of how it could be used. But you can only hold the machines back for so long.

Yeah, 2019 is still kind of shiny and new, but it's still not too early to start looking at the year's best travel photos (so far.)

Manny Machado heads to San Diego, where a boatload of money awaits. Machado reportedly signed a $300 million contract with the Padres, the biggest free-agent deal in US sports history.

The proposed voting age in Oregon. Lawmakers in the state introduced a bill that would lower the voting age from 18.

A man in a crowd in Tehran that attacked a so-called morality police van last week after two young women were detained for "improperly" wearing a headscarf. Iran's morality police enforce the country's strict social rules, but more residents are rebelling against the police and the rules.

B-boying in the cypher

J. Lo, Ne-Yo and Derek Hough (the judges from "World of Dance") teach us all about dance slang. Wait, there's dance slang? (Click to view.)