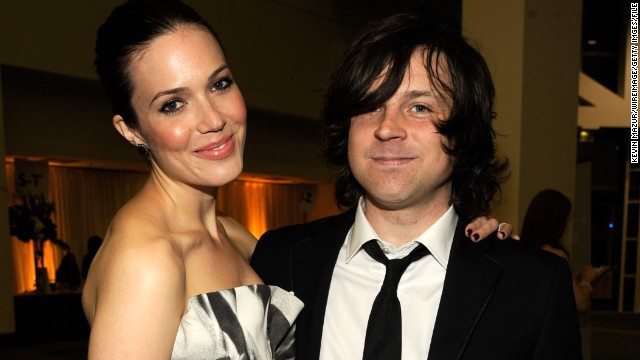 Mandy Moore is speaking out about her former marriage to singer Ryan Adams.

The "This Is Us" star was married to Adams from 2009 to 2016 and addressed their relationship in an episode of the "WTF with Marc Maron" podcast on Monday.

"I felt like I was drowning," Moore said. "It was so untenable and unsustainable and it was so lonely. I was so sad. I was lonely with him."

Maron said he had spoken to Moore for the podcast two weeks before the episode aired.

Last week, the New York Times published a story that included allegations Adams had an inappropriate internet relationship with a teen girl beginning in 2013. Adams said he does not recall having engaged in sexually charged text messages and conversations with the woman, now 20, and would not knowingly do so with someone underage.

Ryan Adams denies report he had internet relationship with minor

Other women quoted by the Times said Adams offered to help them launch music careers, pursued them sexually and -- in some cases -- retaliated when they rebuffed him.

CNN has not independently verified the allegations.

After the story published, Adams apologized in a series of tweets to anyone he may have hurt and disputed some of the reporting.

"The picture that this article paints is upsettingly inaccurate. Some of its details are misrepresented; some are exaggerated; some are outright false. I would never have inappropriate interactions with someone I thought was underage. Period," he wrote.

"His controlling behavior essentially did block my ability to make new connections in the industry during a very pivotal and potentially lucrative time -- my entire mid-to-late 20s," she told the Times.

Adams responded to Moore's comments to the New York Times by having his attorney tell the publication her characterization of their time together was "completely inconsistent with his view of the relationship."

She told Maron, "I would do little jobs, it's not like I completely stopped working.

"But it would become abundantly clear while I was working, things would completely fall apart at home," Moore added. "I couldn't do my job because there was a constant stream of trying to pay attention to this person who needed me and wouldn't let me do anything else."

Moore said she was 23 when she met Adams in Minneapolis while they were both on tour.

Adams was in his mid 30s, she said, and the pair started dating.

Once they married, Moore said, she was living her life for him. She described feeling like a "mother" in their relationship.

"It's an entirely unhealthy dynamic. I had no sense of self," Moore explained.

CNN has reached out to Adams for reaction about Moore's comments to Maron.

Local couple gets the wedding of their dreams