From Cruyff to de Ligt: The evolution of Ajax's $500 million football factory 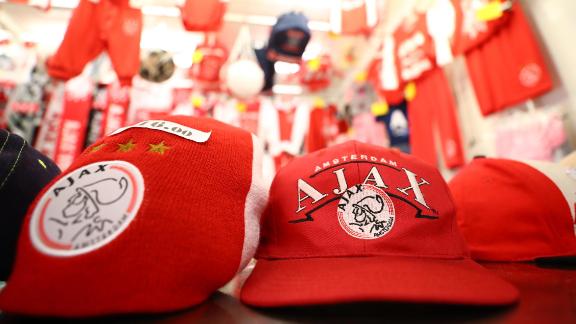 Ajax produces more pros in Europe's top leagues than any other club, CNN goes behind the scenes at the club's academy, 'De Toekomst,' to find out more.

Former Ajax player and coach Danny Blind sits down in the club's boardroom and begins to reel off some of the most prominent players to have contributed to its success over the years.

As well as being some of the most storied names in world football, all were graduates of the Ajax academy -- an institution long-famed for its prolific player output and pursuit of technical perfection.

The Amsterdam-based club continues to churn out some of the most exciting talents in world football today.

Frenkie De Jong, Matthijs de Ligt and Justin Kluivert are among the most recent to roll off its well-tuned production line.

In the past, this trio would have formed the backbone of the next great Ajax side.

But maintaining talent has become an increasing challenge with the Dutch league unable to compete with the riches swirling around competitions in England, Spain, Germany, France and Italy.

While players have always moved on from Ajax, Blind acknowledges that the club's most prized assets seem to leave far earlier than in generations gone by.

There is "the risk that they go in two, three or four years" after being brought through from the academy, says Blind, whose son Daley was a product of the club's academy.

"That's very difficult because all the time you have to rebuild the team," he adds.

Blind captained an Ajax side that reached back-to-back Champions League finals in the mid-1990s, triumphing in 1995 and finishing runners up in 1996.

That team stuck together for a number of years and included a plethora of academy talent alongside established players like Blind and the Finland international Jari Litmanen.

In the 1970s, Ajax won three consecutive European Cups (the competition that preceded the Champions League) with the likes of Cruyff, Haan and Johan Neeskens in its ranks.

Cruyff, the poster boy for Dutch soccer and its philosophy of "Total Football," left for Barcelona in 1973, aged 27. But he did so having won 17 trophies in eight years as a first team player at Ajax.

Few of Ajax's top talents hang around that long now. And for Ajax CEO and former goalkeeper, Edwin van der Sar, the changing reality has forced the club to adapt.

These days, Ajax offers an elite finishing school for young footballers as well as a pathway to first team football for the most talented. Those who excel can likely expect to be sold for the right price with the next crop of talented young players progressing to replace those who leave.

Other clubs of similar stature and pedigree across Europe -- such as Benfica, Porto, Celtic and Anderlecht -- have adopted similar models. What they lack in commercial or broadcasting riches they look to close the gap in player sales.

Analysis of UEFA figures by 21st Club, a football insight firm, shows that the percentage of club revenues from transfer proceeds increased from 26% in 2014 to 38% in 2017.

But few have mastered this model as well as Ajax, in large part thanks to the performance of its academy.

"We don't have the legends, we create them" says Van der Sar, who admits he expects to lose at least two to three players every year.

The main thing for those coming through the system is to "give something back to Ajax" while they are there, he continues. "Win a trophy, make the support proud and of course we know the next step will be to a big club."

Ajax has chalked-up $566 million transfer fees since the 2000-01 season, according to data on the TransferMarkt website, although not all of those sales related to youth academy products.

Ajax has also looked to capitalize on its reputation for bringing through the very best young players.

In November 2017, Van der Sar travelled to China to announce a five-year partnership with Guangzhou R&F to develop what a club press release at the time called the "best youth academy in China."

Ajax also opened an office in New York last year which it said would enable it to "positively influence the future of soccer" in the US as well as "connect companies and clubs in the US to the Ajax brand."

Van der Sar says he would love to have access to the riches available to clubs in other leagues.

But Ajax has had to be more creative in how it operates. The ultimate aim is find advantages the club can exploit to compete with richer rivals -- something it has managed to do in recent years.

Ajax qualified for the last-16 of the Champions League for the first time in 13-years this season. In 2017, meanwhile, it reached the final of the Europa League, Europe's secondary club competition, where it lost to Manchester United.

"I want to bring Ajax back on the world podium and deliver players for ourselves -- to win trophies but also to (provide) the next step for (the players)," Van der Sar says.

"Hopefully, as many Ajax players or ex-Ajax players are going to win the Champions League," he adds. "I'd rather have it with our club. But then if not with a respective big club in other countries," he adds.

In the shadow of Cruyff

For the likes of former Ajax team manager, David Endt, replicating the qualities that make the Ajax Academy unique is not simple.*

Endt was a product of the academy himself, although he never made a first team appearance. He cites good coaches, the culture of the club and the city that hosts it as vital factors in its success.*

"Many of the trainers come from Amsterdam," Endt says, where there is an attitude to "be courageous"and go "out and play with conviction." Others are former players who know what it takes to make it at the club, he adds.

Ajax christened its "School for the Future" in 2015 that allows young players to receive a customized education at a facility on the club's training ground.

It aims to ensure that those who don't make it at least have qualifications to fall back on. But it also seeks to produce intelligent students that can understand the way Ajax plays.

The philosophy of the great Cruyff and his preferred 4-3-3 formation with technically adept and intelligent players continues to define much of what Ajax does.

Endt believes what set Cruyff apart from many of his contemporaries as a player was his "out of the box thinking" that gave him the edge on physically stronger or quicker opponents.

And he sees something similar at play in the way Ajax has developed its business.

As a fan, it can be frustrating to see promising talents sold to richer clubs, he admits.

Then again, he' adds, you have to find a way "to outwit" those who may be bigger and stronger.