A roller coaster on a cruise ship? 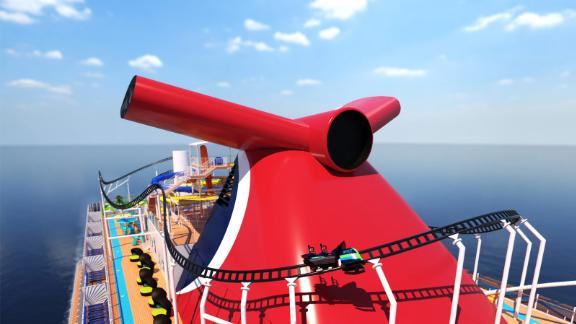 In order to compete, cruise lines like Caribbean, Norwegian and Carnival are going all out and adding rides, slides and even a roller coaster to their already mega ships.

There's a new wave of excitement at sea as several cruise lines race to one-up each other with the latest action-packed, over-the-top amusements.

Carnival, Norwegian and Royal Caribbean, known for their modern megaships, are putting a literal twist on their on-board offerings, with some rousing attractions that are not for the faint of heart.

Now, cruise-going adrenaline junkies can trade chill time for thrills time, with these high-powered, high-speed diversions on the high seas, including the industry's first roller coaster and go-kart tracks, as well as its tallest slide (at a whopping 10 stories high).

One of the buzziest attractions on the head-spinning horizon ahead will crown Carnival's upcoming 5,200-passenger Mardi Gras ship, slated to debut in August 2020 at a shiny new cruise terminal in Port Canaveral, Florida.

It's dubbed BOLT: Ultimate Sea Coaster, and riders on this very first cruise ship roller coaster will reach speeds of up to 40 miles per hour on a top-deck, open-air track that whizzes around for nearly 800 feet of twists and turns. That will include a hairpin turn around the ship's funnel -- all at nearly 190 feet above sea level.

Two riders share the thrills and 360-degree views from one of two all-electric motorcycle-style cars; speeds are controlled by guests' propensity for putting the pedal to the metal. Rides on BOLT will be free; there's a 43-inch minimum-height requirement.

Speeding on the sea

The first and only cruise line to feature a go-kart racetrack at sea, the innovation appears on three of Norwegian's sister ships: the 2017-debuted, 3,802-passenger Norwegian Joy; the 2018-launched, 4,004-guest Norwegian Bliss; and the line's newest vessel, the 3,998-passenger Norwegian Encore, which will be unveiled in November.

On the Bliss, go-kart drivers can set out to burn rubber on a two-story, top-deck, open-air racetrack, which spans nearly 1,000 feet -- nearly the length of the ship -- and includes nine nail-biting, hairpin turns.

Joy's prototype track is about 30% smaller, but it will be enlarged during a ship renovation in April to match the proportions on the Bliss.

When Encore debuts in fall, it will boast the biggest attraction to date, with 1,150 feet of track, 10 turns and four sections of track that cantilever the ship's side by up to 13 feet.

With room for up to 10 electric go-karts to race at once, and the track wide enough for the vehicles to bypass each other at speeds of up to 30 mph, the pressure's on to show just what you're made of on the roughly eight-minute-long runs.

Final scores will be posted on the marquee to herald the winner. Rides cost $9.95 per guest, though full-day and weekly passes for unlimited rides (inclusive of priority boarding) are available; there will be a 55-inch minimum-height requirement.

Not only the waves are high

Ready for a heart-pounding proposition? How about a 10-story-high plunge off the top of a cruise ship, courtesy of Royal Caribbean's Ultimate Abyss slide?

The daring dry slide attraction -- the tallest at sea -- debuted on the line's 5,479-passenger Harmony of the Seas in 2016, and followed suit on its 5,518-passenger sister ship (and the world's largest cruise ship), Symphony of the Seas, in 2018.

Two sinuous, side-by-side cylindrical slides invite riders to pass through the slide's entrance (a depiction of the monster-like jaws of a toothy anglerfish) and to step out onto a glass-bottom platform overlooking the 100-foot drop below -- from the 16th deck all the way down to deck six -- from more than 150 feet above sea level.

If your knees don't give out on you right then and there, you can race to the bottom by hopping atop a customized mat, reaching speeds of up to nine miles per hour.

For the 216 feet of twisting, dark tunnels, riders whiz by flashing lights and audio effects for added multisensory thrills on an adrenaline-pumping ride that averages just over 13 seconds in duration. Ultimate Abyss is free to ride; there's a 44-inch minimum-height requirement.