I don't care that the GOP has condemned Steve King 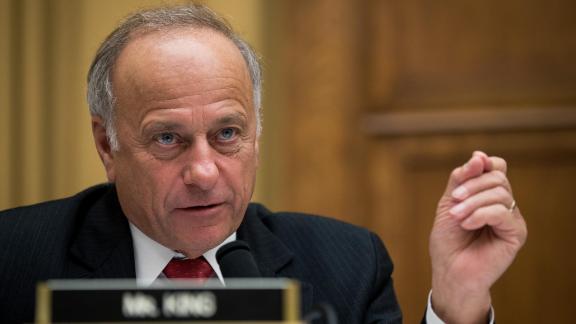 <p>I don't particularly care if the majority of Americans find the latest comments from US Rep. Steven King, an Iowa Republican, to be racist. I don't care how his comments affect the Republican Party, or who is calling for his resignation, or even if he is eventually forced to resign.</p><p>While it is certainly unnerving to see a <a href="https://www.nytimes.com/2019/01/10/us/politics/steve-king-trump-immigration-wall.html" target="_blank">member of Congress quoted in a news article</a> questioning why the term "white supremacist" is offensive, the truth is King has been making -- and then later "clarifying" -- comments of this nature repeatedly over the years.</p><p>Last fall, the Anti-Defamation League <a href="https://www.theguardian.com/us-news/2018/oct/31/steve-king-antisemitism-paul-ryan-anti-defamation-league" target="_blank">asked then-House Speaker Paul Ryan</a> to censure King for doing things such as endorsing foreign politicians linked to neo-Nazi groups. Two years ago, King tweeted his support of Geert Wilders, a Dutch anti-Islam politician, <a href="https://twitter.com/SteveKingIA/status/840980755236999169?ref_src=twsrc%5Etfw%7Ctwcamp%5Etweetembed%7Ctwterm%5E840980755236999169&ref_url=https%3A%2F%2Fwww.vox.com%2F2018%2F6%2F28%2F17506880%2Fsteve-king-twitter-racism-congress-republicans" target="_blank">saying Wilders </a>"understands that culture and demographics are our destiny. We can't restore our civilization with somebody else's babies."</p><p>So forgive me if I'm not overly impressed with the "swiftness" in which House Minority Leader Kevin McCarthy denied King committee assignments following the congressman's most recent episode, because I'm still wondering why he still had those assignments in the first place.</p><p>What does matter to me is whether or not the nearly 600,000 citizen voters of Iowa's 4th Congressional District believe King represents them. Considering he's been in the House since 2003, in some ways we have our answer. But I'm willing to give the voters the benefit of the doubt because many people on both sides of the aisle are on partisan autopilot. They're Democrats so they vote Democratic, or Republicans so they vote Republican, regardless of the actions of the incumbent. Happens all of the time. But this is different. King is different.</p><p>Grand speeches and proclamations make for good television. His resignation would be a significant moment. But if the constituents who have voted for King since he was first elected to the Iowa state Senate in 1996 share his views, then King could well be replaced by someone equally as vile but significantly more cautious with his or her tongue.</p><p>Replacing an overt offender with a more clever one is not a victory for equality. It's a Band-Aid placed on a mortal wound. Democrats and Republicans alike tend to paint embarrassing stories as one-offs that are not representative of the national party, but this characterization misses the mark. An elected official who has been in office for more than two decades is not a one-off, he's a mirror. Or at least that's the assumption.</p><p>And when someone is firmly against multiculturalism and is from a district that is <a href="https://thehill.com/homenews/state-watch/323796-rep-steve-kings-district-is-dying" target="_blank">more than 95% white</a>, the assumptions one can make about Iowa's 4th District are not flattering. King was re-elected with<a href="https://www.nytimes.com/elections/2016/results/iowa-house-district-4-king-weaver" target="_blank"> more than 60% </a>of the vote in 2016. He barely <a href="https://www.cnn.com/2018/11/07/politics/steve-king-re-election-iowa-house-race/index.html" target="_blank">eclipsed 50%</a> in 2018. Maybe his constituents have had enough, and, if that's true, that is the real story.</p><p>So while<a href="https://www.washingtonpost.com/opinions/2019/01/11/tim-scott-republicans-can-no-longer-be-silent-bigotry/" target="_blank"> Sen. Tim Scott's recent op-ed in The Washington Post</a> rebuking King, and McCarthy's dressing down of King are encouraging, the only thing that truly matters are the views of his voters. Those won't go away even if King does.</p>

Hi: 43° Lo: 40°
Feels Like: 34°
More Weather
Rain moves in overnight into Sunday morning and looks to hang around much of the day, likely forcing Mother's Day plans indoors

Weather Blog: NASA launch in Virginia could be visible in the Midwest

Preschool reading corner honors the life of a former volunteer